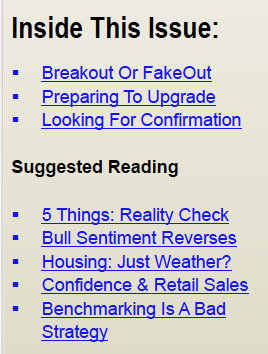 After a very brief respite in the forward momentum of the market, the market was finally able to break above overhead resistance on Friday.  As I stated previously, such a breakout above resistance would confirm that the current “bull market” trend remains intact.

However, as I write that, it is also important to keep the current bull market in perspective. Valuations are stretched, economic data has been weak and the Federal Reserve is in the process of extracting liquidity from the markets. Contrary to what logic would suggest, the markets have rallied in recent weeks in the face of weaker economic data.  However, in the markets today, “bad news” is welcomed as it will potentially keep the Fed passing out “dime bags” of “liquidity goodness” for a while longer. However, that sets the market up for disappointment if the Fed continues to “taper” their bond purchases on schedule to end the current QE program by October.

With the markets still on a valid short term “sell” signal I am not going to adjust the model back to full exposure as of yet. However, I am going to suggest beginning to slowly build equity exposure in portfolios in anticipation of a reversal of those “sell” signals.

Important note: There is a high degree of risk in doing this.  Therefore, if you are more conservative and/or do not pay consistent attention to your portfolio, then I would suggest awaiting a confirmed reversal of the current sell signals.

As I will discuss below, this is not the first time that the market has broken out to “new highs” only to fail once again in a very short time frame.  Such a reversal would entail a reversal of any “buys” made which is why I am suggesting that if you are NOT paying close attention to your portfolio – you may just want to be patient for a little while longer

“Prediction is very difficult, especially if it’s about the future” – Neils Bohr

Breakout Or Fake Out

This past week the market broke above resistance for the first time since the beginning of this year.