Posted by Alexander Green - Investment U 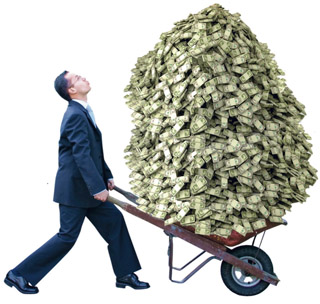 Warren Buffett reported this week that his holding company,Berkshire Hathaway (NYSE: BRK-A), has over $50 billion in cash on hand. That’s the most ever in the more than four decades he’s been chief executive.

Bill Gross, the investment chief of Pimco and another contributor to our Oxford All-Star Portfolio, said this week, “It appears the only safe haven is the front end of the U.S. yield curve.” The really short-term stuff, in other words.

Should you be holding a lot of cash now too? Perhaps surprisingly – since cash and short-term bonds are paying essentially nothing – my answer is “yes.”

Don’t get me wrong. I’m not saying you should sell your stocks and flee the market. I’m only suggesting that you hold cash to put to work in the future.

Why? One reason is that the market has gone a long time without even a middling correction. Trust me, that won’t last forever. Without cash, you can’t take advantage of stock bargains without selling other companies that may have become bargains themselves.

There are plenty of people saying you should be in cash right now, of course. Many, if not most, of them were saying the same thing two, three, four and five years ago.

Where the Puck Is Going

But Buffett is a business evaluator, not a market timer. He did not earn his reputation by holding a giant cash hoard. Rather, he and his partner Charlie Munger have become two of the world’s richest men by following – and improving on – the value discipline pioneered by Benjamin Graham.

When the financial crisis hit a few years ago, he told investors to get out of cash. In the fourth quarter of 2008, Buffett penned a New York Times op-ed piece titled “Buy American. I Am.” Here’s a relevant excerpt:

Today people who hold cash equivalents feel comfortable. They shouldn’t.
They have opted for a terrible long-term asset, one that pays virtually
nothing and is certain to depreciate in value… Equities will almost certainly
outperform cash over the next decade, probably by a substantial degree.
Those investors who cling now to cash are betting they can efficiently time
their move away from it later. In waiting for the comfort of good news, they
are ignoring Wayne Gretzky’s advice:”I skate to where the puck is going to
be, not to where it has been.”

Buffett’s $50 billion cash hoard speaks volumes about where he thinks the “puck” is headed now.

Over the last few years, Buffett has put a lot of his cash to work, making some of his biggest deals ever. In hindsight, I’m sure he wishes he’d bought even more during the chaos of late 2008 and early 2009.

Yet he’s not going to make up for that by paying too much today.

Buffett is clearly biding his time, waiting for a better buying opportunity… what he calls “a fat pitch.” He knows it’s just a matter of time.

I know, I know. It feels wrong to sit in cash and earn nothing. But even a slightly negative return after inflation beats the heck out of experiencing a 10% to 20% market correction with your freshly invested capital.

Charlie Munger once said, “It takes character to sit there with all that cash and do nothing. But I didn’t get where I am by going after mediocre opportunities.”

A word to the wise is sufficient.