Buckle Your Seatbelts, Dr. Copper’s About to Get Bumpy 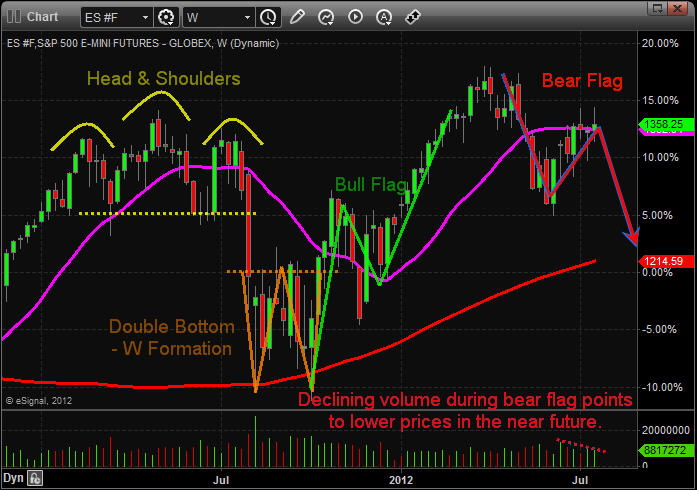 It was just about a year ago today when the S&P was sitting at fresh highs and everyone was enjoying a rather upbeat summer.  It was a nice summer, the markets were calm, and there was a surreal sense of optimism.  Then, in the matter of a few days, things got real ugly, real quickly.

Well, it doesn’t seem like too much has changed since then.  We’ve had mixed earnings reports, ever-evolving worries in Europe, and the always looming fiscal mess in the US.  Once again, are we in the calm before the storm?

It looks like things in Europe may start to heat up again.  Riots turned violent again in Spain as protestors took to the street over austerity measures.  With seemingly no resolution, a sinking tourism industry in the PIGS, and a typically hot summer August on its way, all signs point to further turmoil.

Technically, we’re currently seeing a number of bearish indicators setting up in the S&P and other markets. First, on the weekly chart of the S&P 500 Futures we can see what appears to be a bear flag formation developing.  Note the recent rise in price since the beginning of June on decreasing volume. A second look at the S&P daily illustrates two intermediate time frames that are currently pointing down.

The wave two correction typically proceeds the longest wave, wave three, which is pointing towards a large move down (Note that in the first shorter term cycle the downwards wave three was the longest by far.  We expect the same to be repeated in the longer term cycle.) A look at the longer term view using the weekly chart again supports our argument for a major correction. We have just completed a five wave pattern since the 2009 lows, and it is looking more like a big pull back is due. Remember most major trends end after the fifth wave. If we take a look at the copper ETF, “JJC”, we are provided with further justification. Copper is often referred to as “Dr.Copper” due to its industrial application and is known to be a leading indicator for equity markets. Copper has significantly underperformed equity markets and is likely leading the next move down. A look at the weekly chart which points to a rather dismal outlook. There is a major head and shoulder patterns developing. Last summer turned into a bloodbath with nothing but red candlesticks taking stocks and commodities sharply lower. If you haven’t already, it’s time to lock in some profits. Short, intermediate, and long term cycles are pointing down, and the increasingly bearish technical developments cannot be ignored.  We’ll be looking at entering multiple shorts potentially in the very near future once/if setups present themselves. Buckle up and stay tune for more…

Stay in the loop by joining my free weekly newsletter and weekly video to stay ahead of the crowd:www.TheGoldAndOilGuy.com