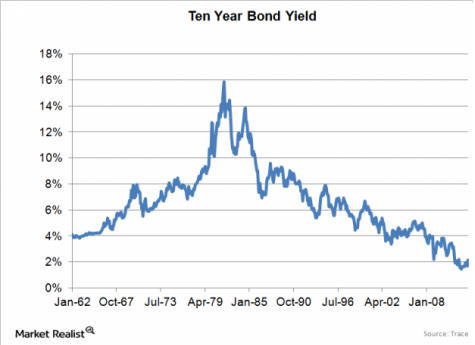 Federal Reserve Chairman Ben S. Bernanke will have a chance to use testimony to Congress today to drive home his message that winding down asset purchases won’t presage an increase in the Fed’s benchmark interest rate.

… Treasury 10-year note yields were little changed at 2.53 percent as of 8:38 a.m. London time. They touched 2.51 percent yesterday, the lowest since July 5, in anticipation of Bernanke’s testimony, even as economic reports showed that U.S. industrial production rose by the most in four months in June and inflation picked up toward the Fed’s goal, supporting the case for a reduction in quantitative easing.

“He’ll say a slowing in the pace of asset purchases isn’t a tightening of policy, and it’s actually still an easing of policy just at a slower pace,” said Josh Feinman, the New York-based global chief economist for Deutsche Asset & Wealth Management, which oversees $400 billion, and a former Fed senior economist. “It doesn’t imply that they’re going to be tightening policy any time soon. They’re not.”

Global stocks and bonds retreated after Bernanke on June 19 outlined the conditions that would prompt the Federal Open Market Committee to reduce and eventually end asset purchases. His remarks pushed the yield on the benchmark 10-year Treasury to a 22-month high and erased $3 trillion in value from global equity market value over five days.

Technically, Bernanke can say that he can taper bond purchases without raising the Fed Benchmark interest rate, for he can. He is in complete control of said rate. Reality dictates something a little different though. The Fed benchmark interest rate doesn’t equal market rates. Ask Dr. Greenspan how difficult it is to get mother market rate to bend to your will by simply manipulating the Fed benchmark rate. He lost control (as if he ever had it) of market rates during his term as he tried to play economic god. Expect the same efforts and the same results from Bernanke.

I urge readers to keep in mind what I expoused in Apple Bonds Proven To Have A Nasty Taste wherein Apple bonds lose 9% in six weeks:

We Clearly & Obviously Ending A 3 Decade Bull Market, Likely At The Tail End Of The Largest Global ZIRP Experiment Ever!

And this final aspect is the kicker. We are likely culminating the end of a three decade secular bull market in bonds. Why in the world would anyone want to buy debt now, in a good, bad or mediocore company? Reference a chart of ten year rates over time, and you will see that once you get this close to zero (and the applied end to excessive ZIRP), there’s no way to go but up. As excerpted from the Market Realist site: