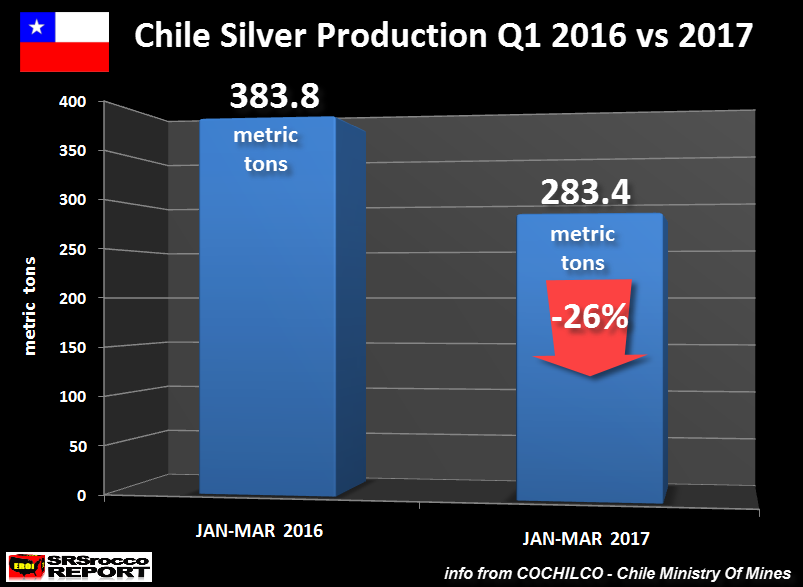 According to the most recently released data from Chile’s Ministry of Mining, the country’s silver production declined a stunning 26% in the first quarter of 2017.  This is a big deal as Chile is the fourth largest silver producing country in the world.  The majority of Chile’s silver production comes as a by-product of copper production.

Chile is the largest copper producer in the world, by a long shot.  Last year, Chile produced 5.5 million tons of copper compared to Peru, who took a distant second place at 2.3 million tons.

Regardless, Chile’s silver production declined to 283.4 metric tons (mt) Q1 2017 versus 383.8 mt during the same quarter last year.  Again, this is a huge 26% decline in the first three months of the year: Chile’s silver production declined 101 mt (3.2 million oz) Q1 2017, due to a strike at the country’s largest copper mine, Escondida, as well as a drop off in copper production from many other producers.

For example, of the 20 copper producing mines (& companies) listed on the Chile’s Ministry of Mining Report, 12 of them stated lower copper production Q1 2017 compared to the same period last year.  Thus, the strike at Escondida only accounted for a portion of the overall decrease in by-product silver production experienced across the entire industry.

The majority of the Chile’s silver production decline took place in March:

According to the COCHILCO’s data, silver production fell 16% in January, 29% in February, and 34% in March.  In just the month of March, Chile’s silver production declined 45 mt.  That is a huge drop off in just one month.

Even though Chile’s Ministry Of Mining forecasts that copper (and by-product silver) production will recover by the second half of the year, the world economy continues to stagnate under a massive amount of debt and derivatives.  I believe we will see falling copper prices as overall demand for the king base metal continues to weaken during the latter part of 2017, and into 2018.

This will put a great deal of stress on many of Chile’s copper mining companies ability to make profits.  So, we may soon experience PEAK GLOBAL COPPER PRODUCTION… once and for all.

For those individuals who want to make sure that I am not pulling these figures off the top of my head, here is the actual table of gold and silver production from Chile’s Ministry of Mining website:

There seems to be many precious metals investors (on my site and on other blogs) who believe that all these supply and demand figures are meaningless because the price of silver hasn’t really performed all that well since 2012.  I agree.  However, my focus on silver supply and demand forces is not to determine a SHORT TERM SILVER PRICE, rather I look at what is taking place over an ongoing trend.

For example, I have published articles on the huge increase in physical silver investment demand since the 2008 U.S. Housing and Banking Crisis.  My focus was not to state that the silver price was going to be determined upon a single year’s worth of rising silver investment demand, rather it was to show that the world is waking up the SILVER STORY.

Furthermore, putting out articles on what it taking place as it pertains to world silver supply isn’t to forecast what the change will do to the price of silver in 2017, but rather how the declining trend will impact the price going forward.

So, for those who precious metals investors who continue to BELLY-ACHE that all these supply and demand figures don’t really change the silver current price that much, I KNOW THAT fer pete sakes… LOL.  I am more concerned about the ongoing trend and what it going to happen over the mid to longer term.

Lastly the Silver Institute just released their 2017 World Silver Survey, and I have been looking over it.  I will be publishing a few interesting articles on some of the data from the report as I believe they are a tell-tale sign that owning physical silver will benefit those immensely in the future.