Bonds and Currencies Brace for BoE and Fed rate hikes 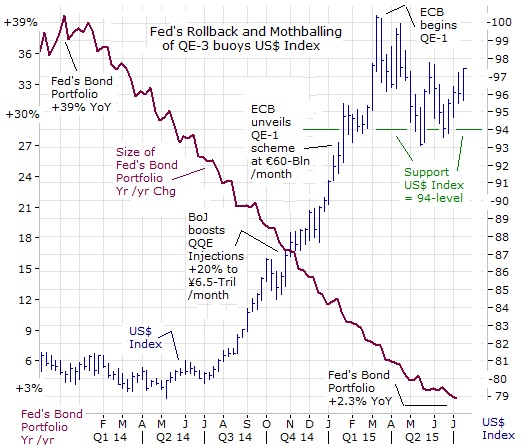 It’s approaching that time of year when traders and central bankers alike depart for long holidays. But this summer is shaping up to be anything but quiet for markets, with betting on a “Greek Exit” from the Euro roiling markets, and Red-chip stocks in China nose diving and requiring unprecedented “Plunge Protection Team” intervention in order to halt the onslaught. After a few weeks of turmoil, the Greek debt crisis has been kicked down the road for another few years, with another EU bailout, and after the Shanghai red-chip index, staged a +10% rebound from its panic bottom lows hit on July 7th, traders now regard these sideshows as “fixed” and under the control of their central planners. With these worries can be put on the back burner for now, it’s back to business as usual, – that is to say,back toinvesting in heavily manipulated markets, in which extreme emergency policies, such as NIRP, ZIRP, and QE have distorted the pricing of virtually all assets, and where your local central bank has your back.

However, with the Federal Reserve poised to hike short-term interest rates for the first time in nearly a decade, “The actual raising of policy rates could trigger further bouts of volatility, but my best estimate is that the normalization of our policy should prove manageable,” said the Fed’s “Shadow” chief Stanley on May 26th. Fischer gave no time frame for when the Fed will start its first tightening cycle since 2004-06, but he made it clear that higher rates are coming.  Still, he warns, communications can be a “tricky business,” and when the Fed does tighten, policymakers are bracing for spillovers to financial markets both at home and abroad. “Some of the world’s more vulnerable economies may find the road to normalization somewhat bumpier,” he added.

The key question hanging over the markets, in general, is whether the Federal Reserve and its Anglo sidekick, the Bank of England <BoE>, will finally begin to hike their short-term interest rates in the months ahead. On June 28th, the Bank for International Settlements, <BIS>, based in Basel, Switzerland, which is an adviser for global central banks, called on the world’s top central banks to start normalizing monetary policy, – either by raising interest rates, or shutting down the printing presses under the guise of “Quantitative Easing,” <QE>, and the sooner the better.

“By keeping rates anchored at these historic, ultra-low levels threatens to inflict serious damage on the financial system and exacerbate market volatility, as well as limiting policymakers’ response to the next recession when it comes,” the BIS warned.  “Risk-taking in financial markets has gone on for too long. And the illusion that markets will remain highly liquid has been too pervasive. The likelihood of turbulence will increase further if current extraordinary conditions are spun out. The more one stretches an elastic band, the more violently it snaps back,” (like the recent experience in the Chinese stock markets), warned Claudio Borio, head of the BIS’s Monetary and EconomicDepartment.

“Cheap money encourages more debt and creates financial booms and busts that leave lasting scars on the economy. They underpin both the potentially harmful high risk-taking in financial markets, while subduing risk-taking in the real economy, where investment is badly needed. And while increases in interest rates could cause stock prices to fall, – the likelihood of turmoil is only increased by waiting,” the BIS warned. It advises that monetary policy should be normalized with a firm and steady hand. “Near-zero interest rates could become chronic in the world’s major economies unless “a firm hand is used to raise them back to more normal levels.” “More weight should now be attached to the risks of normalizing too late, and too gradually,” the BIS warned. “Restoring more normal conditions will also be essential for facing the next recession, which will no doubt materialize at some point. Of what use is a gun with no bullets left?” the BIS report said.

However, the BIS has routinely made such dire warnings over the past few years, and the major central banks have routinely ignored them. In fact, the Bank of Japan <BoJ> and the European Central Bank <ECB>, are engaged in a full blown currency war over the fate of the Euro /yen exchange rate. Both central banks are printing about $70-billion worth of Euros and yen, and flooding the markets with ultra-cheap liquidity, that is keeping long-term bond yields artificially low, and stock markets artificially high. Neither the BoJ nor the ECB have any plan to roll back the QE-liquidity injections, anytime soon. US$ wins the Reverse beauty Contest; Moreover, the monetary policies of the big-4 central banks will soon be moving further out of sync. The Fed began to taper its $80-billion per month QE-3 injections back in January 2014, and finally mothballed it on October 31st, 2014. The Bank of England spent £375-billion on purchasing British Gilts and mothballed its QE-injections in Nov 12. And according to recent leaks to the media, both the BoE and the Fed are preparing to follow the advice of the BIS, and will be the first of the G-7 central banks to hike their short term interest rates, in the months ahead.

On the other hand, the global markets will be swimming in a sea of liquidity, as the Bank of Japan <BoJ> and the European Central Bank….continue reading HERE