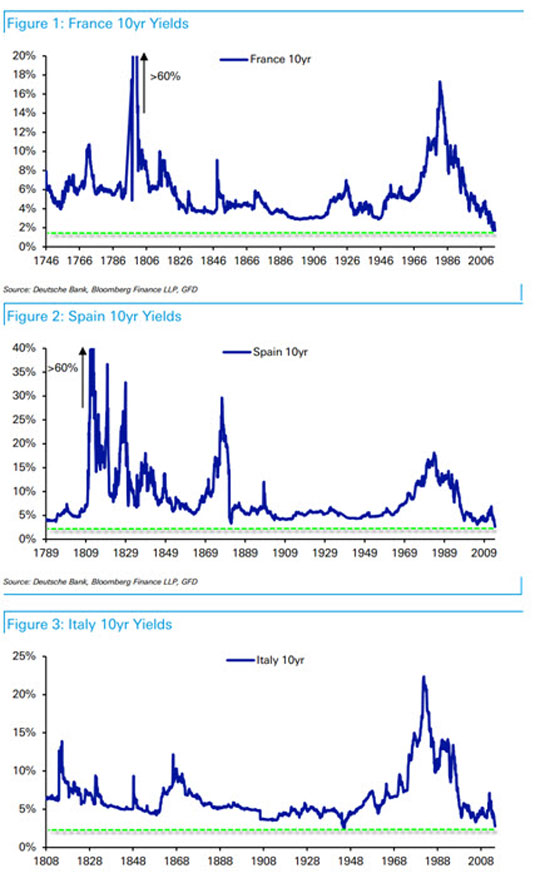 The artist formerly known as Prince once sang that he was gonna party like it’s 1999. After all, when it’s “two thousand zero zero, party over, oops out of time!”

But today’s bond holders are much more ambitious. They’re partying like it’s 1746! As in, more than two and a half centuries ago.

I say that because in the wake of the European Central Bank’s latest policy gambit, yields on the benchmark French 10-year government bond just fell to 1.65 percent.  That is the lowest level since 1746, according to new research from Deutsche Bank.

In Italy, 10-year government bond yields just sank to 2.76 percent — the lowest level since early 1945. Except for that one brief period, yields are the lowest since at least 1808.

And Spain? The country that almost went broke a couple years ago … that still faces record-high unemployment and incredibly anemic growth … and that is still mired in a housing slump that mirrored the one we suffered here?

Well, naturally amid all that risk … its benchmark 10-year yield just sank to 2.6 percent. Not only is thatbelow the benchmark sovereign yield on U.S. Treasuries, it’s also the lowest since at least 1789. You know 1789 don’t you? That was when George Washington became the first president of the U.S., and when the French Revolution began. Look, I’ve seen a lot of market swings and a lot of strange things in my 17 years of following the capital markets closely. My mentor, Dr. Martin D. Weiss, has seen even more over the decades he’s been tracking interest rates and government bonds.