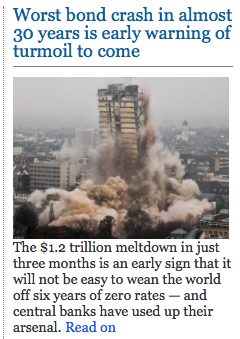 With US$4.8 trillion in assets — or about the size of Japan’s economy — no one manages more money than BlackRock Inc. So, it’s worth paying attention when the firm says it’s time to cast aside its trusted models for assessing risk in bonds.

The gyrations gripping the world’s fixed-income market are so great that it’s almost impossible to make sense of them on a historical basis. In Germany, for example, yields on 10-year securities have surged from almost nothing in late April to about 1 per cent last week — a move so swift that some strategists are likening it to a once-in-a-generation event.

Across Europe, investors are ripping up their old models to analyze the US$100 trillion global bond…..continue reading HERE