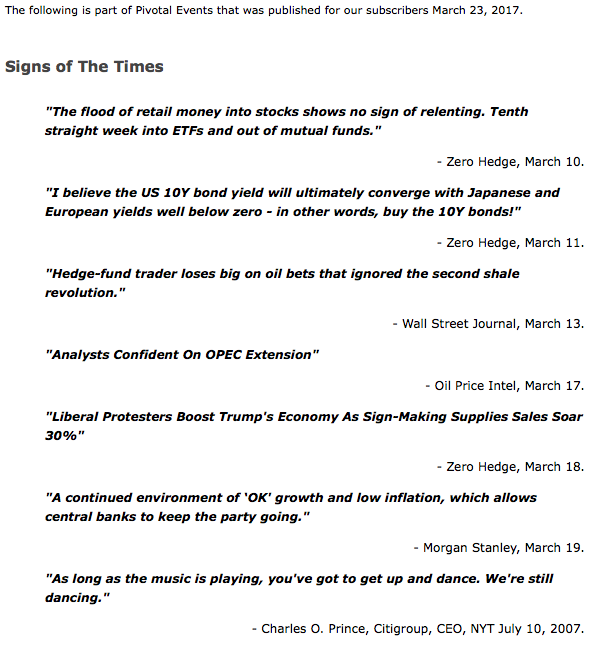 In the fateful month of May 2007, the Treasury curve reversed and in that fateful June, credit spreads reversed. Both forced the dramatic failure of Bear Stearns in early June, which marked the start of the worst contraction since the 1930s. Our presentation in early June included a slide of a crashed train. The caption was that “The Greatest Train Wreck in The History of Credit” had started.

Today, a Morgan Stanley researcher seems confident that central bankers can “keep the party going”. In 2007, the same boast would be accomplished through cutting the Fed rate. Short rates increase in a boom, and this has been a financial boom. Short rates decline in the contraction.

Back in December, we had thought that the positive stuff would run into March. But some items became tired in late February – early March. As noted last week, base metals made it to March 1 and rolled over. Crude oil stayed firm until the end of February. Credit spreads narrowed until the middle of March and as of Tuesday, this has reversed. Essentially, there has been little change in the yield curve since December.

The action in December became sensational enough to suggest that a Big Rounding Top was possible. This was confirmed by even greater technical excesses being accomplished more recently. These were accompanied by very strong sentiment readings. Both only seen at or near cyclical peaks in the stock market.

To back up just a little; with the explosion in November we called the action “Rational Exuberance”. Rational because it was discounting the change from the most anti-business administration in history to what could be the most pro-business. A few weeks ago, we noted that the action had left “Rational” behind and was just “Exuberance”.

Which continued to this week when a setback from a speculative surge began a correction. It has been earned and fits with the ChartWorks “ABC” correction, which could have declined to a “Springboard Buy”. This is a distinctive break in a flat or rising market and it registered on Tuesday. So, we watch for the bounce and how far it goes.

Out there will be the first drop in expanding margin on the NYSE. The actual report is a month behind and is considering a lagging indicator. With this and a MACD Sell on the S&P would confirm that the Big Top was in.

As we await the full development of the big Rounding Top, we can review some critical items.

One is the discovery that when the action in HYG (High-Yield) soars enough to drive the Daily RSI to close to 77 an important top was set by the S&P some 3 weeks later. The high RSI was set on February 27 and the S&P set highs at 2400 on March 4 and 2390 on March 15.

It could take a number weeks to see if the pattern worked as it did in 2007 and at the lesser high in May 2008.

Another relation that Ross has been working on is the action in the Treasury curve. The 2’s to 20’s need to take out a key low. While not that far away, the take-out is uncertain.

We find comfort in reviewing gold shares divided by the bullion price, which has been in a basing phase, essentially since November.

The first low on the ratio (HUI/Gold) was 142 in November and the next at 142 in December. The first rally was to 180 in early February which was overbought enough to conclude a decline for the sector.

The next low was 149 in early March, which was tested a couple of weeks later. At 161 now, it needs to get above the 50-Day to complete the bottoming process.

GDXJ slipped from 43 in early March to 33 a couple of weeks ago. At 36 now, getting above the 50-Day would be constructive.

The bottoming action in December 2015 set up what we have been calling a cyclical bull market.

The “Cyclical” call was based upon the bottoming of gold’s real price as deflated by the PPI.

A rising real price is a sign of improving operating margins for gold miners. It also enhances exploration prospects.

US Shale Oil is Killing OPEC

Check out the following:

Setting Up For a Classic Triple Top