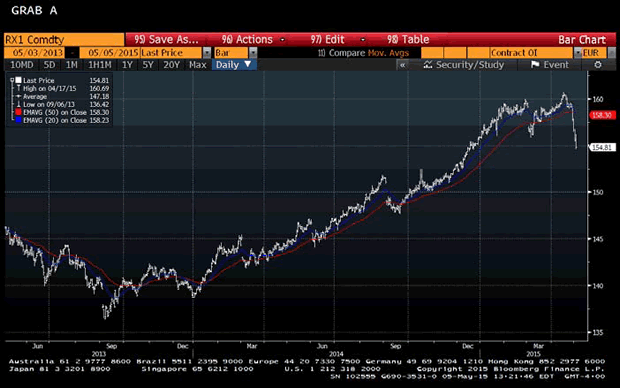 The old saying is that a “Get me in!” bond market is always followed by a “Get me out!” event. In shorter form, it is GMI! followed by GMO!.

This was the case with the price of the US Treasury soaring to an Upside Exhaustion at the end of January. Our special study of January 20th, titled “Ending Action”, reviewed the probability that this could be the end of the great bull market that began in 1981 when the long-dated yield was 15%.

Our Pivot of April 9th noted that the reversal would be a global event and that the “European Central Bank is full of unsupportable positions”. Our April 22 comment was that the loss of liquidity in the US market could be “Tied to an equally significant loss in global [bond] markets”.

More specifically, the reversal in spreads that could be accomplished by June could be as “interesting” as the one in 1998 that took down LTCM.

The Eurobond Future set its high at 160.69 on April 17 and the break to today’s 154 level shows some intense “GMO!”. Technically and within this the German 30-year bond price registered an Upside Exhaustion. Of importance is that the bull move from September 2013 was confirmed by a positive crossover on two key moving averages. These provided support on the way up and have been decisively taken out this week. A negative crossover is being accomplished now. The chart of the German Ten-Year Yield puts the reversal in perspective. Much has been said about nominal rates declining to less than zero. This as it turns out was providing short sellers a very low “carry”.

Adjusted for CPI inflation real interest rates during a financial mania record a distinctive decline. That’s in the senior currency. Sometimes to negative levels, as with the 1873 Bubble. In 2007 it declined to minus 1.5%. This increased by 6 percentage points in the 2008 Crash.

With the CPI rate at close to zero during the first quarter, the low for the real rate was close to 2 percent. Now it is approaching 3 percent.

The typical increase in a post-bubble contraction has been 12 (no typo) percentage points. It has been Mother Nature’s way of ending compulsive expansion and abuse of credit, otherwise known as a financial mania. A huge increase in real rates for global government debt seems inevitable. In which case, the long experiment in artificially lowering rates by policy adventurers would come to an end.

Those who analyze major financial setbacks as policy errors or random accidents, have described them as a “Minsky Moments” or a “Black Swans”. A review of the greatest crashes in history concludes that they have been setup by speculative excess, which is technically measurable. On the stock market part of a bubble, the peak has been anticipated by a distinctive changes in credit spreads and the yield curve. On all six examples since the first in 1720, there has been a reliable seasonal component.

Forget “Minsky “and “Black Swans”, this is central bankers discovering a “Get Me Out!” moment.