Bob Hoye: Signs of the Times 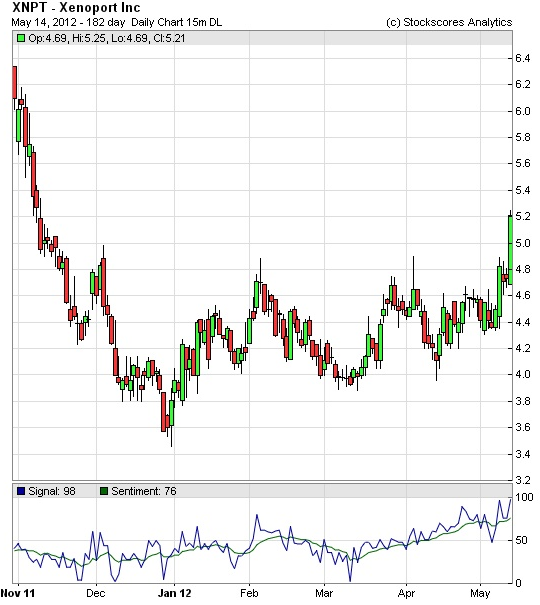 “It is surprising that “Gloom” is being reported so soon after “Boom” was front page stuff. Understandably, “Ooops” had its moment, but really Earth-shaking gloom has yet to occur.”

“Growth in loans to households and companies in the 17-nation euro area slowed in March as a cooling economy curbed demand for credit.”

“Euro-region unemployment rose to a 15-year high and manufacturing contracted for the ninth month.”

Of the sectors we follow, base metal miners (SPTMN) provided the best lead to the sell-off in the senior stock indexes. We were looking for a rolling top centered around February and the SPTMN set its high in late January and failed on the test in February. Often, mining stocks lead the high in base metal prices and this was the case as metals (GYX) set their high in February.

As noted at the time, the gold sector (GDX) also set a high in early February and this year’s high for gold was at the end of the month. In retrospect, it was some five weeks ago that we concluded that the “opposite” action between golds and the big board was developing. This is important for the longer term.

However, the action is somewhat oversold and a pause or bounce in most sectors seems possible.

The plunge was to 2.91 on Monday, with an RSI at 29. That’s a big swing from very over bought to rather oversold, and a brief rally seems possible. The chart follows.

Seasonals have been running some weeks ahead of “normal” and it is uncertain how long the “summer driving” rally will last.

Base metals declined as well, but without the extreme swing of gasoline prices. Prices could briefly bounce, within what seems to be a cyclical bear that started in April 2011.

Soybeans and soybean meal were the last runners in the rally and, as noted last week, had accomplished an Upside Exhaustion reading. The rally for ‘beans started at 1094 in December and the high was 1512 last Thursday.

Agriculturals were delayed on the probable commodity rally from October to around February. Soybean complex did the best on the late rally, but these did not participate with the cyclical peak for most commodities set in 1Q2011. A test of the high is needed before the call can be made for another cyclical peak.

Sugar, corn, cotton and wheat have declined to 52-week lows.

The Canadian dollar set its really heroic high at 110 in late 2007 and plunged to 76.6 with the crash that ended in 2009. The high with last year’s excitement about commodities was 106, which compares to 102 reached this year.

It could trade in a narrow range for a number of weeks.

Action in the DX continues constructive, but it will take some time to rise through overhead resistance at the 80 level. A pause in the advance would assist most financial markets, including nominal prices for gold and silver.

Generally, US spread markets remain benign while Mother Nature’s assault on castles in Spain is generating headlines – again. As the nearby chart shows, prices have declined in the past few days. Because of all of the engineered mark downs and other folderol, exact comparisons to the disaster of last August-September can’t be made.

But we can consider that April’s price improvement is the set up to the reversal in credit markets expected in May.

We have found that if there is a party in spread products in the first part of the year (Yes!) the seasonal change in May (???) can lead to a disaster later in the year (???).

The collapse of LTCM in August-September 1998 is the classic example of reversing spreads taking out a prestigious firm.

If history continues to guide, sovereign debt markets will drift into another calamity after mid-year. Our study on the subject was written about twenty years ago and we like to use it in a timely fashion. SOVEREIGN DEBT FOLLIES is attached. The sub title is “IT HAS TAUGHT US NOTHING”.

Last week’s view on the long bond was that the rally against setbacks in the stock market was appropriate, but that it was getting tired. And then the future added a couple of points. The price could decline a little as the orthodox investment world of stock and commodities firms somewhat.

Link to May 11th ‘Bob and Phil Show’ on TalkDigitalNetwork.com: “IT HAS TAUGHT US NOTHING”

Although the stock market attracts the most attention during a great financial mania, the action has included the equivalent mania of investors reaching for yield and brokers reaching for commissions. There is a typical path that defines a post-bubble contraction that includes widespread remorse and chagrin. In the credit markets this has included the collapse in sub-prime mortgages, the hit to corporate bonds and more recently the contraction is threatening the sovereign debt market. The focus has been on the PIIGS, but if the past is any guide this is the initial phase of another historical problem in sovereign debt.

During the New Era that culminated so extravagantly in 1825, London was the financial centre and the City floated issues by Russia, Prussia, Spain, and a number of Latin American countries as well as cities.

With the usual swings in the business cycle, the contraction continued until the mid- 1840s.

The next long expansion ended with a mania of asset speculation in 1873. At the height of that mania and as credit markets were becoming stressed an important New York newspaper editorialized that nothing could go wrong. The main point was that the US did not have a central bank that would be constrained by the gold standard in accommodating the needs of Wall Street.

Instead there was confidence that the Treasury System and its admired secretary could issue massive amounts of credit by buying bonds out of the market.

While recklessness was rampant, there were rational comments. The Economist‘s April 27, 1872 edition advised:

“Avoid states which are constantly borrowing, which must therefore be paying off the interest on their old debt with the fresh loans.”

The progress of a disaster in sovereign debt in 1873 was nicely chronicled by headlines in The Economist:

July 5: “[Spain] Making Arrangements for the Payment of Current Coupon”

August 2: “Spanish Interest Will Not Be Paid”

The Argentine crisis of 2001 was documented by headlines from a number of publications.  It is worth noting that as late as June there was confidence “Appetite for Credit Risk has Improved Considerably”.

December 14-20, 2001: “Angry Argentines Take Their Displeasure to the Streets”

There seems to be a common pattern on the transit from confidence to dismay, and it will be interesting to see how it works out this time around. The distinction is that the 1873 example included many countries and as the historian, S.G. Checkland, wrote “Many half-barbarous states pressed eagerly for funds, and spent them with no display of wisdom.”

The Argentine problem in 2001 was not accompanied by insolvencies in a number of countries.

However, there is no question that the 1930s disaster in all lower-grade debt was part of a massive post-bubble contraction. It was reviewed in Foreign Bonds: An Autopsy, a rather appropriate title, published by Howland Swain Company in 1933:

How bad can it get? Typically the post-bubble contraction afflicts all aspects of the financial markets – including sovereign debt. The process is devastating and continues until both lenders and borrowers vow to never be reckless again.

“Bankruptcies of governments have, on the whole, done less harm to mankind than their ability to raise loans.”