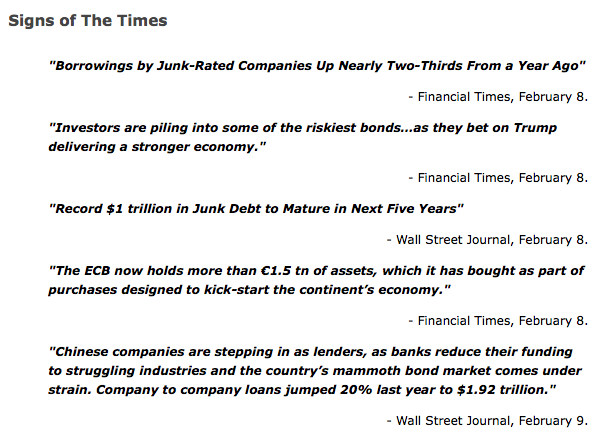 The following was published for our subscribers February 16, 2017.

In July, the ChartWorks noted technical excesses in the Bond Future. We concluded that action in the US Treasuries was the least distorted and would be the best market to use to determine a major top. For technical analysis, the European market is too dominated by the ECB.

We are now getting technical excesses in Junk.

The headlines above, are recording the anecdotal aspects of a speculative blow-out in lower-grade bonds. It could be global.

The ECB wager that buying €1.5 trillion in assets would “kick-start” the economy rests upon the unproven notion that an economy can be “kick-started”. One might just as well try to kick-start a 747.

This kind of anecdotal record can be followed by panicdotal conditions.

The American popular uprising now has a dynamic executive whose pro-business utterances have been catnip to equity traders.

We read about some big players on the wrong side of this move.

The rush to buy accomplished technical excesses in December, which we noted could be eased by a sharp correction. Instead, a modest correction has been followed by new highs, which have been driven by two things. Further announcements about reductions in taxation and regulation, which reality could be many months away. Still a positive prospect ahead.

More immediate, has been favourable action in industrial commodities, which has been likely to run into March.

Bond buying programs by central bankers are being thwarted, repeat thwarted, by market forces. Mother Nature has been fully engaged, Mister Margin is monitoring the action.

Over the past year, the combination of firming industrial commodities and narrowing spreads has been the main carrier of the uptrend. And, eventually, could be the agent of change, which we will be watching for.

The action has been likely to be positive into March. This is being confirmed by the Transports, which got out of their funk and are making new highs.

Within this, the speculative surge that began in early November has been outstanding. In many ways, including in some series the best in a couple of decades. However, we have been wondering if the right-hand side of topping could extend beyond March. And to use economic jargon, “on the other hand” if crude rolls over, so does the stock market.

The “ABC” correction that the ChartWorks has been working on could start soon.

The main driver for the banks (BKX) from June until mid-December was the steepening yield curve. From over-extended then, a correction followed to last week when the index found support at the 50-Day. That was at 92.5 and the jump to 97 suggests compulsive buying. Also, as we have been noting, there is the prospect of getting rid of Dodd-Frank, which is called the “Wall Street Reform and Consumer Protection Act”. Designed by congress it is more intrusion than protection.

Some who have studied Dodd-Frank have said it is worse than Obamacare.

As for reforming Wall Street – it has all been done – in 1934. The main intention of the SEC Act was to reform Wall Street so there would never be another financial bubble. One of the sponsors boasted that “It will put a cop at the corner of Wall and Broad Streets”.

Banks have done well despite the flattening curve, indicating that repealing D-F would be good for the sector. This has been almost discounted and the curve, so to speak, is away below the BKX.
Canadian banks such as RY are building outstanding technicals for an important high.

As noted last week, credit spreads as measured by JNK/TLT registered technical excesses in momentum and pattern. This was also registered with the peak of the Treasury action in July. The decline in the TLT has been from 143 to 117, at its worst.

A turn to widening seems imminent and would be a negative for global banks.

JNK accomplished technical excesses and the correction will be underway when the index takes out the 50-Day moving average.

Long Treasuries are poised for another brief bounce.

Crude oil survived the huge and potentially negative COT numbers. Our position has been that after a seasonal setback in January, firming could run into March. So far, so good. A quick thrust to an overbought condition would complete the move.

Ross has a chart that says that 12 months after a crash low, an important high can be accomplished. Followed by an intermediate decline.

Base metals (GYX) have been expected to rally out to 332 in March. Severe pressures ended a year ago in January at 235 and the “Rotation” carried it to 283 in October. With the election results, it has rallied to 339, which accomplishes somewhat more than our goal.

It is overbought enough to suggest an intermediate correction.

Grains (GKX) have been acting well. We have had a target of 308, which has been the high-side of the trading range. A couple of weeks ago, we noted that it could be exceeded. At 318 now, there is resistance at 325.

Overall, commodities have had some good gains out of the disaster a year ago and are now eligible for an intermediate setback. The latest surge has been helped by the slide in the dollar, which is preparing for another significant rally.