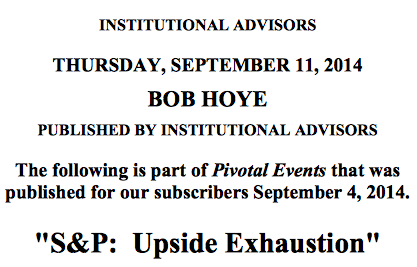 “Monetary policy ultimately must be conducted in a pragmatic manner that relies not on any particular indicator or model.”

Obviously, Yellen wants to keep the US dollar on the PH.D Standard.

This was the Conference Board number and it was 92.4 in August, compared to

“Italy’s consumer prices this month dropped the most since records began after the euro-area’s third-largest economy slipped into recession.”

“Brazil’s economy slipped into recession after contracting more than expected in the second quarter.”

There are two ways of learning how the economy really works. Decades ago, this writer started reading what economists were writing. Essentially, economics is the history of ideas. Then there is the history of the financial markets as provided by newspapers of the day, chronicles, diaries and journals. This is the history of reality.

The former is a world of theories only loosely connected to reality. This is the foundation of interventionist central banking. The clear intention in forming the Fed was to prevent the harsh financial setbacks that forced recessions. According the NBER, June 2009 ended the 19th recession since the Fed started business in January 1914.

The promise to prevent financial setbacks and recessions has yet to be fulfilled.

After so many decades it is obvious that the theory and practice of interventionist central banking has been inadequate.

Within this it is worth emphasizing that harsh setbacks could be prevented.

The other absurd notion has been that once started a crash will continue unless the Fed does something heroic.

Benanke’s above boast seems uttered only to make his stand in 2008 seem even more heroic. There was nothing heroic about it at all. All such massive crashes end on their own.

At the next signs of weakness, policymakers will step up the rhetoric about monetary ease.

The usually positive transition from August to September has been, well, positive for the stock market. This even includes Shanghai which is working on an uncorrected 11% jump since early July. The European STOXX set its high in June at 3250 and sold off to 2978. The rebound had made it to 3200 and seems to be struggling.

With consumer confidence at level unseen since 2007, US car sales have soared to record levels. In this department, our theme has been that so long as the stock market was trending up so would the economy.

Momentum and sentiment bullishness have been as good as it gets and one number has now become more sensational. Investors Intelligence has been keeping track of newsletter opinion since 1963 and the bear camp is down to only 13.3%. This has not been seen since August 1987.

On our own work, the S&P has registered a Monthly Upside Exhaustion reading. The last one was with the 2000 blow-off. It is quite something to have 500 stocks flying in loose formation accomplish such a reading.

Stock markets run on their own dictates and at this point on a “normal” cyclical bull, interest rates would be rising and pundits would be worrying that it would impair the “recovery”. At such points we would advise that rising rates is due to demand by speculators and so long as rates were going up it was a plus for the stock market.

Recently, we have seen someone else publish observations, rather than official opinion on this. Of course, the observation has been that short-dated interest rates go up with the stock boom and down with the bear. The latter has been interesting because in 2000 and again in 2007 the street was convinced that the “Fed-cut” would extend the stock bubble.

That was not the case an as usual interest rates plunged with the crash.

The Fed’s recklessness has prevented a “normal” rise in short rates and there seems to be little meaningful discussion about such a “normal” event.

[Today the ECB again embraced absurdity with a rate cut from 0.15% to 0.05%. Could this be a pre-emptive move to prevent a contraction? Or maybe it is a pre-post-hoc policy move? The plus for US stocks and bonds did not last long.]

Unfortunately, this could prevent the tout to stay fully invested at the top because the Fed would engineer a perfectly-timed “Fed-cut”.

However, there is something going on in the yield curve that will be reviewed in the next section.

With last week’s charts we noted that credit spreads were working on a reversal similar to what was accomplished as financial speculation peaked in 2007 and in 2000. This pattern continues and at 1.5%, it needs to break above 1.6% to provide the alert.

As measured by the 2s to the 10s, curve flattening has been on since November and in using the ETFs it has become the most overbought since 2007. The recent “rally” reached .022, two weeks ago. This appears to be a test of .022 reached in late July. Taking out .020 would reverse the trend.

In 2007 and in 2000, the reversal to steepening also anticipated each of those undeniable contractions. In thinking a little more about this, once the boom becomes a roaring party contraction is inevitable and undeniable.

Last week we noted that crude was oversold and working on a Sequential Buy pattern. Also noted was that it could take a few days to become effective. Instead, it jumped too quickly.

It looks like the action is testing the low and with a little time a tradable rally should follow. Considering the modest responses out of the previously oversold grains, this also could be modest.

Oil stocks (XLE) soared to a very overbought condition at 101.5 in late June. We advised taking some money off the table. The initial low was 94.5 which took out the 50-Day ma.

The rebound made it to 99 last week, stopping at the 50-Day ma. Today’s 1.6% drop is serious and taking out 94 would turn the sector down.

Base metals (GKX) joined the “Rotation” a little late and set the low in March at 321. The delay was due to liquidity problems in China, which may not have gone away. The rally made it to 376 in July and set the highest Weekly RSI since the cyclical peak in 2011. The correction was to 360 and at 372 now it seems to be a test of the high.

The trade has been good for us and when it started we wondered if it could be the start of a new bull market. Our Momentum Peak Forecaster did give us a cyclical peak in March 2011 and it would be technically satisfying to get the opposite.

While this seems possible, the action has to get rid of the overbought and we are looking at seasonal weakness into late in the year.

Base metal miners (SPTMN) have done well and, in keeping with a long tradition, had led the rebound in metal prices. The key low was 703 in December and somewhat oversold. The high was 954 at the end of July and was somewhat overbought. The subsequent low was set at 869 on Tuesday. Last week’s slide took out the supportive 50- Day ma. This now provides resistance at the 900 level. If the test fails we should look to the mining stocks as leading the action in metal prices. Down.

As part of retail food price inflation, butter has been rallying and is now working on a hyperbolic blow-off. The chart follows.

We have been concerned that the firming dollar would have an effect on many commodities.

We have had some questions about Armstrong’s Confidence Index. Ross has made some trades off of it over a couple of decades.

We will give it a few days and see what happens.
In the meantime, we continue to watch gold as a financial indicator.

The gold/silver ratio increased to 66.9 in the middle of August and backed off to 65.5. For the past week it has been at the 66 level and today’s jump to 67 is interesting.

For new readers, the ratio becomes volatile and provides a warning on the longevity of a boom. We have been noting that rising through 67 would be interesting and through 69 would be the key breakout.

If this is accompanied by widening credit spreads and a steepening yield curve it would signal the end of the bubble.

Another indicator is gold’s real price.

Our Gold/Commodities Index set its low at 2.28 in early June. After a couple of corrections, the uptrend was set in the middle of July. At 3.75 now, rising through 3.90 would extend the uptrend. As an indicator this would suggest that orthodox investments would roll over.

As a proxy for gold’s real price the next advance would confirm the start of a new cyclical bull market for the sector. This would also show a marked increase in the investment demand for gold.

In the meantime, a good buying opportunity could be possible in late October.