Bob Hoye: “Positive Rotation Into May” 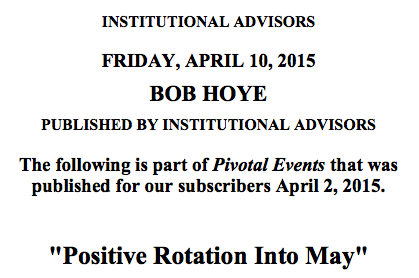 On this week’s release of NYSE Margin Debt, Business Insider headlined “Traders are betting on stocks with tons of borrowed money”. As noted on our last review, the pattern has been a compulsive peak in margin and a correction in the amount and the stock market. Then the peak for the stock market would be set on the secondary high for margin debt. Clearly the action is working on the secondary high in margin, which is a rare “test” of the initial high. Yet another measure of extreme speculation.

And ecstasy in measurable amounts has been registering since June, which suggests the only why out is down.

That covers recent great financial bubbles and it is worth reviewing a “normal” bull market whereby the stock market typically peaked 10 to 12 months before the business cycle peaked. Investors stayed long as the market was declining because business and economic numbers were good.

However, this changes during the era of financial asset inflation when stocks and the business cycle peak virtually together. NBER determination of the US business cycle starts in 1857 and the examples are 1873, 1929 and 2007.

On March 19 Zero Hedge headlined “Philly Fed Signals Worst Margin Compression Since Lehman”. The conclusion was that the last two examples of profit margins plunging a recession soon followed. Going along with this, S&P Earnings are recording the sharpest drop since July 2007.

OK, the cycle for business activity and share certificates is mature and becoming precarious. Perhaps because of impatient central bankers the action is more precarious than otherwise. The extra leg up in margin debt is saying as much.

Maybe there should be an ETF on “precarious” but then the equivalent could be ETFs on volatility, the VIX.

It is worth updating the ChartWorks in February review of the old Dow Theory. At that point it had been six weeks of “non-confirmation” since both the DJIA and Transports had both set highs. In which case, the price correction would be moderate. Anything longer and the degree of correction would increase. Non-confirmation ran 10 weeks so a more significant decline would be possible.

Transports set their high at 9310 in December and have gently slipped below the 200-Day at 8661. The action is not oversold.

The NYSE comp (NYA) continues on its big Rounding Top pattern. This index as well as the senior indexes set a False Breakout in late February. That was accompanied by the most bullish sentiment since 2007 and least bearish since 2000.

Extreme sentiment is one concern, which with the False Breakout, suggests the last gasp of exhausted speculators.

In the fateful year of 2007 the market cap of global equities reached $60 trillion. The crash took it down to $25 trillion and now it is at $80 trillion. Numbers are rounded.

After great enthusiasm, US credit spreads reversed on the seasonal schedule in June. Widening became extreme in January as forced selling of crude oil maxed out. The rebound became very overbought into March and the spread has been trading either side of the 50-Day ma. This could continue through April. But a marked decline below the line would be an alert to further widening.

As the US expansion became somewhat more vigorous the curve has been flattening. It could run for 12 to 16 months and then roll over indicating contraction. This worked for us in 2000 and in 2007 when the boom was strong enough to invert the curve. But full inversion is not required, just the reversal to steepening would be noteworthy. April is Month Fourteen on the trend.

In a financial mania the turn to steepening was a killer at the end of the last two booms. In each example the turn was accompanied by the equivalent turn in credit spreads. This time around spreads reversed in June and the curve has yet to reverse. Both could be reversed by around mid-year.

In the meantime, long Treasuries became very overbought in January and corrected some 10 points into early March. The low price was 143 and the rebound has made it to 149. The season is favourable through April.

On the longer term, the rally to the high was described as “Ending Action”. A significant bear could follow.

Once it started, the plunge in crude oil had a possible run of 6 or 7 months, which counted out to January. Months of choppy action would be probable, which could affect the action of other commodities.

However, our Brief Update of March 24th noted that a “rotation” into some depressed commodities was possible. It would not be as strong as the one out of January 2014.

The low on the CRB was 207 on March 18th and the initial bounce made it to the 50-Day at 220 last week. The subsequent low was 211 yesterday morning and it looks like it could rally through April.

Within this, base metals (GYX) set their low at 300, bounced to 324 last week, which was above the 50-Day. It is still above the line, which is constructive. Through 324 and the rally could make it the 335 level.

Grains (GKX) are working on the same pattern but the initial bounce did not make it above the 50-Day ma. The low was 289 and now at 300 getting above the 50-Day at 305 would be constructive.

Crude is also in the pattern and at 50 it is slightly above the 50-Day. Getting above the last high of 52.48 would be constructive.

Action in the precious metals sector continues without lustre.

Lustre is elsewhere. Canada’s Financial Post headlines “Taking Investing to the Margins”. Canadians are margining houses and stocks to be in the hot action. Reported as the greatest employment of leverage in fifteen years. Over in China, inexperienced customers are opening brokerage accounts at the rate of 1.5 million – per week – as their stock market soars. This last made headlines in 2007.

It is ironical that the Fed and gold bugs both desperately need dollar depreciation. But the Fed can no longer get the “bang for the buck” regarding inflation. Instead there has been the equivalent of hyper-inflation in stocks and bonds, which is again demonstrating that the public decides what the public decides to speculate in. This is getting close to burning out when Mister Margin makes the tough decisions.

Some improvement in commodity prices into May is possible. This could help the dollar price of silver and gold. It would be constructive to have gold shares continuing to outperform the bullion price. This set a good low as crude’s crash ended in January. Earlier rallies were constrained by the 200-Day ma, which is declining. The rebound from last week’s low has to work its way above the 50-Day for the action to become positive.

The overall condition remains that the party is still in orthodox investments, which is highly leveraged. The un-party continues in precious metals where we hope there is minimal leverage employed by either bulls or bears. We also hope that at some point all of the inflation bugs will have been shaken out of the sector.

Then it can go up driven by improving returns as gold’s real price continues to rise. We have been buying some gold stocks into weakness, but are not fully invested.