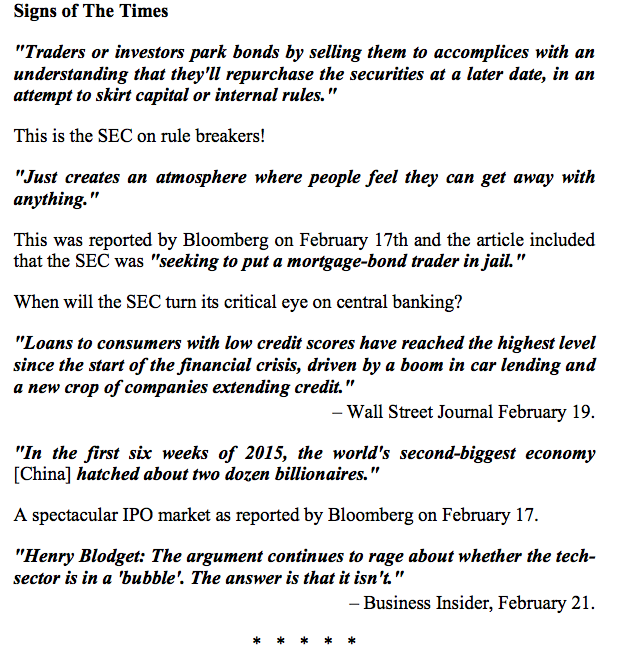 Clearly, William McChesney Martin’s job description of the Fed is no longer applicable. The Fed and other senior central banks are not only drinking, but have embraced the punchbowl. What’s worse, they are too far into the party to quit. Compulsive policymaking, so to speak.

When opportunity presents, the Chartworks notes excesses as they occur in commodities ranging from copper to coffee to cotton as they reach identifiable peaks. This would also include precious metals as such opportunities show that “overboughts” do work in un- manipulated markets.

Central bank manipulation of stock and bond markets is celebrated and regarded as ongoing. After all, policymakers will know when it is time to quit. Our view is that they will not willingly quit. At some point, Mother Nature and Mister Margin will take away the punchbowl.

This formidable tag team ended the rally in Junk in June. Using seasonal forces, the price peaked and fell into a Springboard Buy in December. This put an end to the decline and associated widening credit spreads. Both needed a correction and now JNK has bounced enough to register a Springboard Sell.

Resumption of widening spreads will be a negative.
The Treasury curve continues flattening, which is a positive. The Advance/Decline line on the S&P remains positive.

We have been using the NYA to keep track of the broad market. It stayed above the 50-Day ma and then popped to a new high yesterday. Widely followed senior indexes jumped to new highs as well.

The overall stock market is stretched as to duration of the run and intensity of speculation. One should be watching for change and on Valentine’s Day Ross reviewed his unique approach to the Dow Theory.

Both the Dow and the Transports set new highs on December 29th. DJIA set a fresh high yesterday. Transports have not set a new high. Non-confirmations that last for less than six weeks tend to generate modest corrections. This week is number eight, which suggests a more-than-modest correction is at hand.

Transports accomplished an Outside reversal yesterday and were weak earlier today. Can the Venerable Dow Theory overwhelm Modern Portfolio Theory?

Another timing item is the Chartworks review on the S&P rally following a severe low in crude oil prices. It counts out to around March 6 to 13.

A loss of momentum in the senior indexes would suggest an important change.

This week, Business Insider repeated the standard definition of inflation as “Too much money chasing too few goods”. Considering the unprecedented “accommodation” by frantic central bankers, goods should be at the moon. But they are not. The problem is not in the markets but in the definition. The classic definition was “An inordinate expansion of credit”, which explains today’s rampant inflation in financial assets.

Both in base and precious metal circles the notion remains that all of that “ease” will eventually drive up commodity prices. Well, that’s how it worked in the 1970s and the link should be continuous.

Afraid not, the inflation in credit has been associated with soaring prices for financial assets. Eventually there will be “too many goods (paper) and not enough bids”. Have you ever seen a hot IPO market last forever? New issues always satisfy excessive demand, and then some. A future Pivot will tell some stories about the 1968 example, which was outstanding.

If history continues to guide, the failure of speculation in a bubble in financial assets will not see a massive rotation into tangible assets.

Crude continues in the forefront and satisfied our target of a possible low in January. Following previous such crashes, it took months to set a bottom. The shortest was two months and the longer the process extends, the closer it will be to the start of the next global recession when most commodities will be weak.

Rallies in crude have prompted minor rallies in other commodities, which could last for a while.

Lumber fell out of its sideways pattern and the March contract has dropped to 282. The last high was 364 in August. On the continuous contract the cyclical high was 411 set in early 2013. Importantly, it has taken out the slump in June to 295.

The old formula that a reckless Fed drives commodities is not working.

Last June we thought that the action in the DX would go from overbought to super- overbought. That was accomplished at 95.85 on January 26th. The trading range has been between 93.85 and 95. This could be easing the overbought condition and the range could continue for a month or so.

The “World” is short the dollar. Just think about all of that debt service payable in US dollars into New York.

The Canadian dollar plunged to a “super-oversold” and has been stabilizing. The low was 78.13 set in late January. The trading range has been between 78.75 and 80.80. This could continue for some weeks.

The key to a number of successful trades in lower-grade bonds as well as the stock market has been the action in JNK. At the plunge-low of 37.26 in December it registered a Springboard Buy. Last week the rally was strong enough to register a Springboard Sell.

It is now giving the latter signal on the Weekly as well as a Daily Upside Exhaustion. The latter has only been seen only 7 times since 2007 and each was followed by a significant setback.

Credit spreads which seriously widened from June until January have enjoyed a very good correction. The worst was 213 bps and the best was 191 bps on Friday. The spread is now at 193 bps. Not much but the correction could be over.

We were positive on long-dated Treasuries from January 2014 until early in December when this page started looking for “Ending Action”. The ChartWorks identified the top and we have been expecting a significant price decline.

This is close to a 50 percent retracement and looks like a good test of the high. The forecast has been for much lower prices.

Comments on European bonds will be updated next week.

When looking at gold’s real price, as in relative to commodities, it has been becoming more precious. The long decline reversed in June and increased to 505 in January. It has corrected to 451 on February 14. Now at 461, rising above 463 would end the correction. The rise of real gold prices has been one of the main features of a post-bubble contraction.

Silver’s price relative to the CRB soared to 323 (moved the decimal point) in May 2011 and plunged to 117 in December. Cleary silver was vulnerable to the crash in crude. The index has recovered to 144 in the middle of the month and has checked back to 135, which is support at the 50-Day ma.

Another feature of the post-bubble condition is silver underperforming gold. It could modestly outperform most commodities as gold outperforms “most everything”.

With our special study in November, we began to accumulate gold stocks on weakness. The sector is in a bottoming process and we are not yet fully invested.

Gold stocks are for traders and investors, gold itself is a trade against whatever currency you are in.