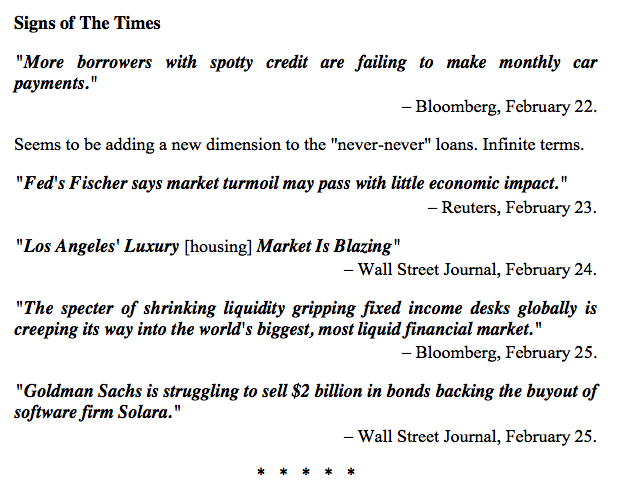 The following is part of Pivotal Events that was published for our subscribers March 3, 2016. Diminishing liquidity in what used to be the very liquid Treasury market continues concerning. Of course this is due to interventionists being able to drive nominal interest rates to exceptional lows. Real rates, as adjusted by CPI inflation, have declined on every great bubble since the first brewed up in 1720. In the 1873 extravaganza they declined to minus 9 percent. In the 1825 example it was to minus 6 percent. For consistency, these are in the senior currency.

It should be emphasized that through financial history the record has been that once speculation has been pushed far enough the senior central bank has had little influence upon the yield curve, credit spreads and real long-dated interest rates.

Flattening and spread-widening have been the feature since June and at times the moves have unsettled equity markets. Despite all the talk about changing the Fed rate, credit markets reversed to contraction mode.

This suggests that when the serious move in real rates gets underway it will overwhelm the radical experiment in nominal rates.

With the last contraction, which is a polite way of describing the 2008 Crash, real long rates increased from minus 1.5 percent to 6 percent. The rise of over 7 percent was described as the worst financial calamity since the 1930s. The Great Recession.

As that eased rates decline to minus 1 percent in 2011. At around 3 percent now, the increase amounts to 4 percentage points. Let’s call this modest distress. Beyond an 8 percentage point increase would be serious.

However, the typical increase in real rates in the severe post-mania collapses has been 12 percentage points. This is possible.

The abuse of credit markets by financial adventurers at central banks, academe and Wall Street has been without precedent.

As a wrap, if policymakers really wanted to improve liquidity in the Treasury market they could end the arbitrary standard and make the US dollar convertible.

On the nearer term, our target on the S&P has been the 50-Day moving average when it was at 1949. Last week we thought that a target had been accomplished and that a setback was possible. The decline in the VIX was enough to register a Spring Board Buy. Some 20 percent of these do not work and this one did not.

So we are back to riding the rally that was likely to run into March.

Banks (BKX) have rallied from 56 in early February to 64. The 50-Day at 67 has been the target. This and a high 60 on the Daily RSI could complete the rally.

Base metal miners (XME) have been outstanding with a rally from 11.38 in mid-January to the 18 level. This has had two constructive steps, but yesterday’s jump from 17.55 to 18.32 shows short covering. The action is getting compulsive.

It is a percentage blessing and it is time to take some money off the gaming table.

Action in the Oil Patch (XLE) has been modest but constructive. The low was 50 in mid- January and it has worked its way to above the 50-Day at 57. Now at 59 it needs to get above resistance at 62 to extend the rally.

The overall market (NYA) has recovered from 8937 in January to 9865. There is a tested low in and this week the index got above the 50-Day. Action is constructive and there is resistance at 10300.

This is a rally within a cyclical bear market.

Our February 18th Pivot noted that the action had become impetuous. Everybody suddenly wanted in. The swing in the Daily RSI on the HUI was so outstanding that it even showed up in the Weekly chart.

The HUI low was 99 on the January hit. In reaching 173 today the gains have been outstanding. The latest enthusiasm is the “Golden Cross” whereby two moving averages – well – cross. The ChartWorks has a thorough study and the results have not been consistent.

The Daily momentum high was two weeks ago, the price high could be set soon. A consolidation of some weeks would be constructive.
The gold/silver ratio is again acting as the metallic credit spread.

Both have further to go on this credit cycle.
Our target on the gold/silver ratio has been “around 100”.