Bob Hoye: Checklist for a Top 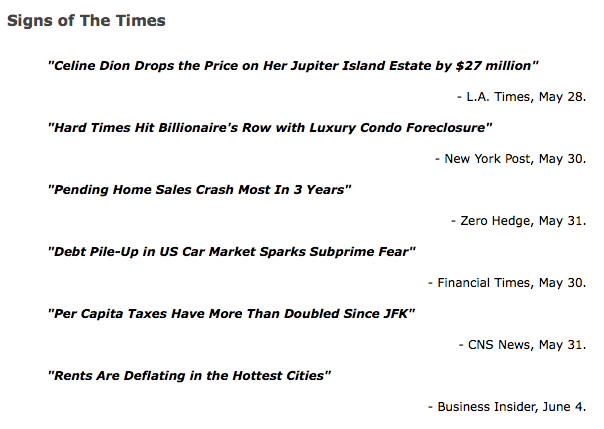 The following is part of Pivotal Events that was published for our subscribers June 8, 2017. The story on Dion’s house sale is that it was listed two years ago at $72.5 million. Other headlines indicate a quickly weakening real estate market. It is worth noting that residential real estate peaked two years before 1929 and one year before the stock market peak in 2007.

The other problem will be the collapse of the debt bubble in cars.

And then there will be the unwinding of all that credit card debt, which is up to the highs of 2007 (Chart follows).

Understandably, we don’t publish a “Checklist for a Top” all that often. But when we do, it is daunting. Not everyone is a researcher or trader. There are real lives and portfolios out there that are vulnerable.

Financial history calls for a high around now. As we have been noting, London and European exchanges tend to complete big bubbles in May – June. New York can set a good high with this and following correction, rally into September. It is uncertain if that rally would be to a new high.

London (EWU) has rallied strong enough to register an Upside Exhaustion, which relates to momentum. It also registered a Sequential Sell, which is pattern. To have these signals register within the time window for the top is a strong indication that England’s part of the global financial boom is completing.

Much the same holds for Europe (FEZ), so its participation in the boom is maxing out. On schedule. The last such signal was in May 2007.

Canadian and US banks accomplished technical excesses on the rally into March 1. BKX reached 100 and has declined to 88 last week. This followed the 50-Day ma down and is testing the moving average now. Canada’s biggest bank is RY and its high was 75. For three weeks, it has been declining below the declining 50-Day to 69.

Both may not be successful in testing the 50-Day, as the season when spreads can reverse is at hand.

We have been thinking that the banks would lead the general market down.

With Tuesday’s “Checklist for a Top”, we now watch for deterioration that would confirm the rollover. Outside of the stock market itself, this will be found in the credit markets.

On the CRB, last week we noted that taking out support at 177 would be a significant break. At 175 now, the action is failing and the 155 level of January 2016 beckons. Will it provide support?

Commodities have been declining since the start of the year—along with the declining dollar. It is probable that the DX will strengthen into later in the year and this will hit most commodities. In which case, one of the features of the post-bubble world is a long bear market in most commodities. Another feature is a chronically firming senior currency, which is still the US dollar.

Quite likely, this will confound central bankers whose commonsense/theory quotient is out of touch with reality.

Crude oil is sliding this week. The rally from 26 in early 2016 to 55 was supported by the 20-Week ema. Since March, the decline has mainly traded below the 20-Week. At 45 now, crude has dropped 10 points as the dollar has declined. There is support at the 42 level and in the meantime crude could trade flat for a while.

Oil stocks (XLE) have been declining well below the 20-Week ema. The spike up to 77 in December registered technical extremes and the low has been 64.60 yesterday. There is support at this level which could hold for a few weeks. As with the product, oil stocks can find seasonal lows later in the year.

As Ross pointed out, lumber likes to set a triple high with technical excesses. This was accomplished in April, with the high at 414, which compares to the cyclical high of 412 in March 2013. Since May, the trade has been below the 20-Week ema.

The initial decline found support at 340, which was at the 200-Day ma. It could trade near this level for some weeks. The sector is vulnerable to liquidity problems in the fall.

Base metals (GYX) have not responded to the weaker dollar. In trading below the 20-Week ema, the action is in line with the other industrial commodities.

However, the index found support at the 309, just above the 200-Day ma. Metals could trade sideways for a few weeks.

Base metal miners (XME) rallied from 11 in early 2016 to overbought at 35 in February. The low was 28 and this week’s jump to 30 gets the index above the 50 and 200-Day moving averages. A trading range could run for some weeks.

Industrial commodities could trade sideways for some weeks. In August, we will begin to officially worry about seasonal weakness into late in the year.

Our other “comfort” for positioning gold stocks is to have the gold/silver ratio going down, which is not the case.

The most important part of this section is the direction of the gold/silver ratio. Up is signaling pending credit problems.