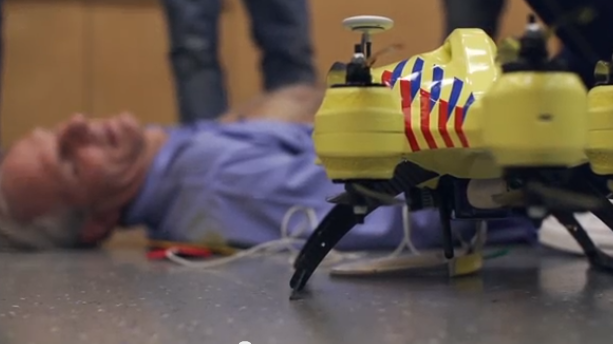 A Dutch engineer has created a flying defibrillator for emergency situations. The drone, called the Ambulance Drone, would be stationed at various points in the city. In an emergency, people on the scene can call it in and it arrives a few seconds later. he built-in defibrillator unit can be used by anyone and it allows doctors to monitor the situation after the shocks are administered.

The drone includes a webcam and loudspeaker and allows remote doctors to walk people on the scene through the process of attaching the electrodes and preparing the defibrillator. The creator, Alec Momont of TU Delft’s Faculty of Industrial Design Engineering, said that 20% of people can operate a defibrillator without instruction and the number rises when they have prompts from trained personnel.

 ‘Some 800,000 people suffer a cardiac arrest in the EU every year, and only 8% survive,’ Momont explains. ‘The main reason for this is the relatively long response time of the emergency services (approx. 10 minutes), while brain death and fatalities occur within 4 to 6 minutes. The ambulance drone can get a defibrillator to a patient inside a 12 km zone within one minute. This response speed increases the chance of survival following a cardiac arrest from 8% to 80%.’

The system is still in prototype stage but there is a good chance it could be launched in five years for about $20,000 each. Drones are still not allowed to fly autonomously so they can’t wing their way around downtown Delft with their helpful payload… yet. It will be interesting to see these robots flying around one day, dropping first aid when needed.