Bitcoin Trading Alert: On The Brink of a Possible Reversal 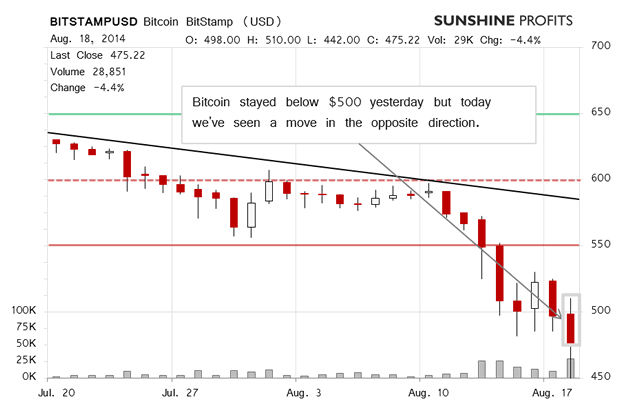 Yesterday, Bitcoin crashed temporarily on BTC-e. We described this in our last alert:

(…) earlier today we saw a massive sell-off which brought the price of Bitcoin down from around $460 to $309 (!) in a matter of minutes. The currency erased most of the losses in the subsequent quarter of an hour and has stabilized around $440 since then.

Right now it seems that the move down to $300 is not representative of the sentiment so we wouldn’t bet on such a move at this moment. Also, the level at which Bitcoin has paused today is around $450 which corresponds to a similar level on Bitstamp.

The actual reason for the rapid decline on BTC-e can only be summarized by stating that somebody sold a lot of currency. We’ve read a more speculative analysis aiming to present a possible cause of the decline:

The event started at 1:36 PM (UTC+1) when large sell orders began to show up on the third largest western Bitcoin exchange BTC-e. Downwards momentum increased steadily as the orderbook became increasingly thin, crashing prices to a low of USD 309 per Bitcoin at 1.43 PM. In the following minutes prices rebounded swiftly on thin volume back to around USD 442 as arbitrage traders started to take advantage of the discount relative to other exchanges.

BTC-e is one of the few large exchanges that offer margin trading to their clients via the MetaTrader platform since November 2013, but the details of who excactly provides the funds necessary for margin trading have remained unclear. The shape and especially timing of the crash points towards margin traders being liquidated (or stop orders being executed), similar to what happened on Bitfinex a couple of days ago.

However, unlike Bitfinex which is transparent about open swap positions, BTC-e does not provide important data which would be needed to provide a more thorough analysis and so this last statement can only be considered a good guess.

So, it might be possible that the crash was caused by margin calls. Does this change anything?

While a move from $460 to $309 is definitely an important event, it doesn’t actually represent the market sentiment. Bitcoin came back from the slump and the losses were erased. The implications here are more important for Bitcoin traders using BTC-e. It seems that the exchange might be currently prone to such wild swings. It’s best to keep an eye on the price action on the exchange so to identify other possible “flash crashes.”

Since the crash didn’t have a lasting effect on the market, it seems that such events might not be as important for investors, even short-term ones, as it would seem at first sight.

Let’s take a look at the charts to see if anything has changed since yesterday. Yesterday, Bitcoin went further down, to around $475. The volume was significant, the highest during the whole recent decline and the highest since Apr. 25. Yesterday was a significant day in the Bitcoin market. In our last alert, we wrote:

(…) the recent move down has already been quite strong. There was a surge in volume and now we’re seeing less trading than earlier during the decline. We’ve already seen a strong move down being followed by a breather (Saturday) and more depreciation (yesterday and today). This might suggest that most of the move down is already behind us.

On the other hand, what we’ve seen today (this is written before 8:30 a.m. ET) still looks like a pretty pronounced move down. These two hints give us a mixed picture.

What might be decisive now is the fact that we’re getting close to $450, the level at which Bitcoin stabilized in May and the starting level of the last strong rally (May-June). This level might stop the declines.

So far (this is written before 7:15 a.m. ET), $450 has in fact stopped the decline. The action today hasn’t been decisive in any direction but it seems that we might be seeing the beginning of a reversal. The volume, however, is lower than yesterday. This weakens the implications of today’s action. On the long-term BTC-e chart we saw a strong move down yesterday on explosive volume. As we’ve already mentioned, Bitcoin hit $309 at one point during the day before coming back to around $440 at the end of the day.

Today, we’ve seen a move up on lower volume. This move has been more visible than the action on BitStamp but the volume doesn’t quite support a reversal. It is only natural to ask yourself if we’re actually seeing the beginning of a new rally now. This is what we’ve done. We share our insight with you.

Currently it seems that the action today supports a reversal at this time. This is not supported by volume which makes us weary of long speculative positions at this time. Whether Bitcoin closes the day higher than yesterday (or, at least, not much lower than yesterday) is one of two important signals of a possible change in the short-term situation.

The second indication of an improvement would be a move above $500. This is not automatic, mind. If we see a move above $500, we will still need to evaluate whether the situation supports a move up or if we’re seeing more sideway action.

Summing up, in our opinion no speculative positions should be kept in the market at this time.