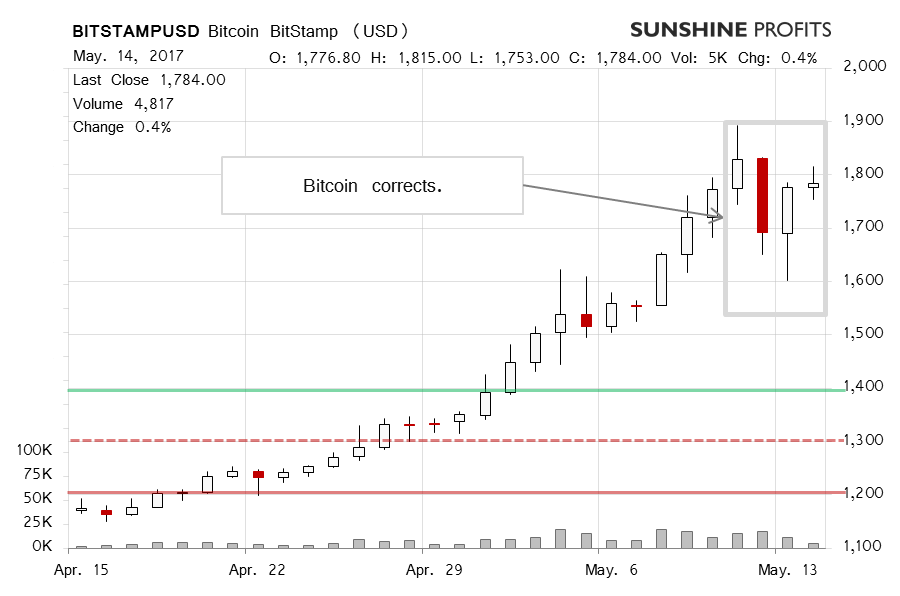 In short: no speculative positions.

A hacker attack has swept across the globe encrypting user files and crashing corporate services. In an article on CoinDesk, we read:

Extortionist hackers who may be using leaked computer exploits from the U.S. National Security Agency infiltrated computers in dozens of countries in a fast-spreading attack that forced British hospitals to turn away patients and breached systems at Spain’s Telefonica SA and organizations from Russia to Taiwan.

The ransomware used in Friday’s cyber-attacks encrypts files and demands that victims pay $300 in bitcoin for them to be decrypted, the latest in a vexing style of security breaches that, at the very least, forces organizations to revert to backup systems to keep critical systems running. The malicious software has infected more than 75,000 computers in 99 countries worldwide on Friday, most of them concentrated in Russia, Ukraine and Taiwan, according to Dutch cybersecurity company Avast Software BV.

Several other well-know companies have been affected such as Deutsche Bahn or Renault. Reports have also emerges claiming that people are unwilling to pay the ransom since it’s relatively complicated for them to set up a Bitcoin wallet.

This is bad publicity for Bitcoin as it highlights the features of the currency that have captured the imagination of mainstream media for some time now – the superficial anonymity and the possibility to use Bitcoin for illegal transactions. It is perhaps not fair for the currency – it is only a tool in the hands of criminals and there’s nothing inherently criminal in Bitcoin itself. Actually, the more interesting part of the story is that it is still too hard for people to use Bitcoin – a state of things that has prevailed for a couple of years now.

For now, let’s focus on the charts. On BitStamp, we saw a correction. Not a strong one, but a move down nonetheless. Does this mean that the situation is bearish now? Let’s recall our recent comments:

The move up looks very overextended right now with the RSI over 90 (!). This is not a typical situation. This might mean that we’re in for a correction. If the correction transpires, its depth might be the most important situation in the market in months. For instance, if it’s shallow, we might have a buying opportunity on our hands.

The move down looks bearish on the face of it and it might just as well be the case that more declines will follow. At the same time, the decline was modest. Yes, the move on Friday was relatively deep in terms of price but it was also reversed, at least partially, on Saturday. More declines have followed since then (this is written around 11:30a.m. ET), but the volume hasn’t been convincing. So, we have a correction on relatively low volume. What might this mean for the market? On the long-term BTC-e chart, we see the move down from the recent top. In our previous alert, we wrote:

The recent move to the $1,800 level doesn’t change much, in our opinion. Bitcoin has gone up very far very fast. The RSI at 90 also spells trouble for the short term. This might mean that a correction is long overdue. Is it possible for Bitcoin to move higher? Yes, this can’t be completely ruled out. At the same time, the balance of probabilities has actually shifted to slightly more bearish. The next move, if it in fact is a correction, might have far-reaching implications for the medium term. If Bitcoin breaks below $1,400, we might see a prolonged period of depreciation. If we see a move down, but not significantly lower and a bounce to the upside, we might be in for a continuation of the rally.

Much of what we wrote then is still up to date. We have seen a move down but not one strong enough, in our opinion, to change the short-term outlook and tilt it to significantly bearish. We might be in the first phase of a strong move down, however, it is still to soon to claim this decisively. The risk of seeing a rebound to the upside and an invalidation of the whole move lower is to great, in our view, to bet on lower prices just now. This might change in the next couple of days.

Summing up, in our opinion not having speculative positions might be favorable at the moment.