Biotech: Why I’m Taking Profits In This Booming Sector 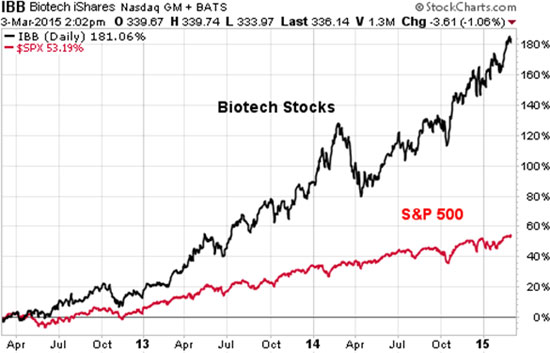 Biotech stocks are on a historic run.

Over the past three years, this sector outperformed the S&P 500 by 128%. In fact, biotech stocks outperformed almost every sector you can think of since 2012. This outperformance was due to several factors

That’s because we are seeing huge technological advances in areas like immunotherapy, life sciences and orphan drugs (which used to treat rare diseases).

What’s more, hundreds of billions of dollars in sales are vanishing from Big Pharma companies like Pfizer (PFE), Merck (MRK) and GlaxoSmithKline (GSK).

That’s because patents on their best-selling drugs are expiring.

This is forcing Big Pharma to invest (using the billions of dollars in cash on their balance sheets) into the biotech space in hopes of finding the next blockbuster drug.

I’ve talked about these catalysts numerous times over the past three years as a reason to buy biotech stocks. However, valuations are out of control.

In other words, many of these stocks are priced for perfection — as if their early stage drugs are already generating billions of dollars in sales.

If you followed my recommendation to buy into this sector, I suggest taking profits right now.

Not only are valuations near historic highs, but the “smart money” is starting to increase their short positions in the sector.

One of the best measures to track the biotech industry is through the iShares Nasdaq Biotechnology ETF (IBB). This fund tracks the largest biotech stocks and has nearly $7 billion of net assets.

This fund has been on a tear during the past three years. For example, if you had put $10,000 into IBB three years ago, you could be sitting on upward of $28,000 today.

The monster return we’ve seen in biotech stocks is both momentum- and fundamentals-based.

From a technical level, these stocks have been in an uptrend for 36 months. Many biotech names reached multiple new highs during this incredible run.

On a fundamental level, cash has been pouring into biotech stocks. This cash has come from large-cap healthcare stocks.

Large-cap healthcare stocks have lost hundreds of billions of dollars in revenue over the past few years as patents expired on some of their blockbuster drugs. (That is, drugs generating more than $1 billion in sales.)

Companies Look to Buy the Next Blockbuster

Companies like Pfizer, Merck and GlaxoSmithKline have a combined $58 billion in cash on their balance sheets.

They’ve been using this cash to invest in biotech companies (through partnerships and direct investments) in hopes of finding the next blockbuster drug.

The FDA has also been a huge help to the industry. In 2014, the government agency approved 41 new drugs.

This is the fastest pace of approvals in 18 years.

It’s also the second-highest on record, topped by 53 drug approvals by the FDA in 1996.

Once a drug receives FDA approval, the company is allowed to sell its product to consumers. That means the company will begin to generate revenue and eventually profits.

This is also great news for the company’s share price, since most biotech stocks experience quick pops following FDA approval.

It’s Getting Harder to Find
Cheap Stocks in This Space

Another catalyst for the industry includes rapid advances in key areas of medicine.

These catalysts have contributed to one of the greatest stock runs in biotech history.

For example, the IBB biotech ETF is trading at 50 times earnings. That’s about three times higher than the S&P 500.

Investment giant Goldman Sachs (GS) points out that some of the biggest biotech names are approaching a 10-year valuation high based on their price-to-sales ratios.

That’s just one of the reasons Goldman downgraded the sector from “Buy” to “Neutral” in January.

Goldman also highlights how Amgen, Celgene, Regeneron and Gilead have recently become some of the most heavily shorted stocks. (This is based on Goldman’s Hedge Fund Trend Monitor report.)

In short, the smart money is betting these stocks will decline in the months ahead.

However, valuation should never be the sole purpose of shorting or selling out of a position. After all, expensive stocks can always get more expensive.

However, another big catalyst that could threaten the biotech sector …

Last month, the Obama administration said it would seek authority to negotiate prices on high-cost drugs under Medicare.

I’m sure most of you agree that market forces — not the government — should determine the price on drugs.

In addition, the Republican-controlled Congress is against this measure — and most voted against this initiative in the past.

However, healthcare costs are out of control.

Over the next year, Obama’s budget plan projects a 30% increase in drug benefits due to the rising cost of specialty drugs.

This model of negotiating prices is a key reason why drugs are now as much as 60% cheaper in other countries.

In short, it’s difficult for a politician to go on record supporting higher drug prices for elders. We could see politicians find a middle ground and negotiate small price cuts.

This step alone would be enough to push biotech stocks lower from these super-inflated levels.

During the past three years, biotech stocks have been on fire. There are plenty of tailwinds in the past that helped contribute to this historic run.

However, biotech stocks are priced for perfection. Any negative news could result in a huge pullback in some of these names.

My suggestion is to take profits in the sector. The reward of owning these names at current high multiples does not justify the risk.