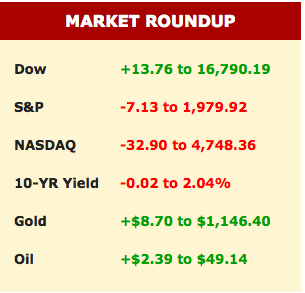 A series of “bio-bombshells” is hitting the drug stocks where it hurts – in the wallet!

On Sunday, it was the New York Times that published a story headlined: “Valeant’s Drug Price Strategy Enriches It, but Infuriates Patients and Lawmakers.”

Yesterday, it was the Wall Street Journal with a story titled “For Prescription Drug Makers, Price Increases Drive Revenue.”

And of course, late last month, the industry got its bogeyman in the form of Martin Shkreli. His company, Turing Pharmaceuticals, bought a drug called Daraprim that treats an infection called toxoplasmosis. Then the company proceeded to hike the price by more than 5,000% before backtracking somewhat.

What the heck is going on?

Well, you have a wide variety of biotechnology and pharmaceutical companies that take different approaches to the business. Some of the biggest players funnel billions of dollars in profit from patent-protected drugs into research and development, in order to come up with new and better treatments for life-threatening diseases. Politicians and regulators grudgingly accept the rising cost of their drugs because at least they’re re-investing in their businesses.

But companies like Valeant Pharmaceuticals (VRX) are increasingly coming under fire. They’re buying old drugs or entire companies, hiking prices willy-nilly, and distributing huge chunks of profit to shareholders and management rather than investing in R&D.

The Times story notes that Valeant quadrupled the price of a drug called Cuprimine. That drove up the cost of one man’s treatment to $35,000 a month – a cost largely eaten by Medicare. His own out-of-pocket co-pays surged to $1,800 a month from $366.

The Journal tells a separate story about Biogen (BIIB) and its Avonex treatment for multiple sclerosis. Biogen raised its price 21 times, at an average annual increase of 16%, despite falling prescription volume and the fact it’s an older medication. The story goes on to note that U.S sales growth of 30 top drugs surged 61% on average, even as prescriptions rose one-third as much.

There are so many sides to this story that it’s hard to track them all. Surging drug prices raise widespread ethical, political and social concerns.

But this column is focused on the investment implications of world developments. And the negative publicity is clearly putting downside pressure on biotech stocks in particular and drug stocks in general. Reason: Investors are worried Washington could slap price controls or other punitive measures on pharma companies that have been making billions for their shareholders off the backs of vulnerable, sick Americans.

Valeant has tanked by $100 a share just since August, while Biogen has dropped $200 in only seven months. The benchmark iShares Nasdaq Biotechnology ETF (IBB) has lost more than 15% in only the past three months, and is desperately trying to hold above its August panic low.

I would keep a very close eye on those August lows if I owned any biotech stocks or ETFs. If that area of technical support can’t hold, it will probably lead to even more follow-on selling as investors throw in the towel. That, in turn, could put more downward pressure on investments like the PowerShares QQQ Trust (QQQ). After all, biotech and other health-care companies make up around 14% of its holdings.

● Nelson Peltz and his Trian Fund Management firm are notorious for buying stakes in companies, taking board seats, and agitating for management changes, strategic shifts, and the like. But the activist investor’s latest $2.5 billion bet on General Electric (GE) appears different.

GE is a huge industrial conglomerate and Peltz’s suggestions for what it should do are fairly run-of-the-mill. That’s leading to questions about whether his involvement will actually do anything longer term for shareholders.

● Volkswagen AG is shutting down non-essential investments and planning to cut spending to the bone as it struggles with the potentially huge financial impact of its emissions scandal. The carmaker may need to pay more than $7 billion to fix affected vehicles, plus several billion dollars more in fines in the U.S., Europe, and elsewhere.

● The energy industry has been battered and bruised by the collapse in oil prices. But it appears to be getting closer to a significant legislative win: The repeal of the U.S.’s 40-year-old ban on exporting crude oil. The ban was enacted during the era of Arab oil embargos, but looks increasingly unnecessary thanks to the surge in U.S. oil and gas production.

Should we export oil? Will Volkswagen be able to survive this self-inflicted crisis? Do you think the gains in GE shares will stick? Hit up the website and let me hear about these or other topics of the day.