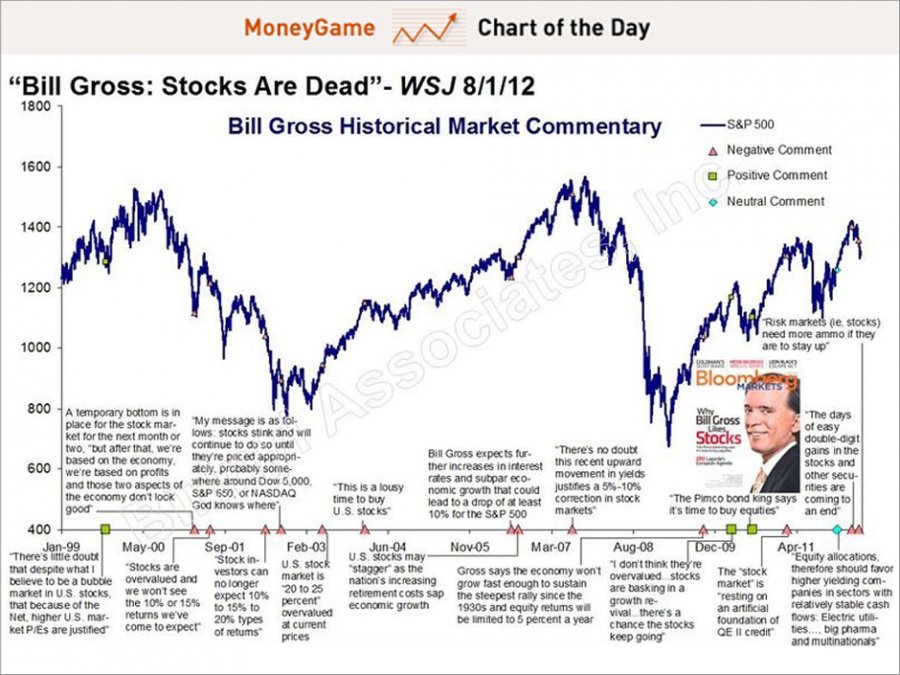 Bill Gross runs PIMCO’s $252.2 billion Total Return Fund. With such a massive fund investing in income bearing instruments during a collapse in interest rates, its no wonder many call Gross the world’s pre-eminent bond fund manager.

Specifically Gross says that “The cult of equity is dying”,  that stock investors should rethink the age-old investing mantra of buying and holding stocks for the long run. He says consistent, annual returns from stocks are a thing of the past.

Gross makes the case that stocks have averaged a 6.6% annual gain on an inflation-adjusted basis since 1912. That said he thinks that the 6.6% return was a  “historical freak” that is unlikely to occur again because of slowing economic growth around the world. He says that return “belied a commonsensical flaw much like that of a chain letter or yes—a Ponzi scheme.”. In short that with growth on the US economy averaging 3.5% over that period of time, “investors were “skimming 3% off the top each and every year.”

Of the $1.8 trillion Pimco has under management in its various funds, only about $6 billion is in active equity assets.

With Gross’s track record in calling stock market moves so negative, one has to wonder if its not time to buy. Be sure to click on the chart below and view his track record.

Click on the Chart or HERE for Larger Image. To read Bill Gross’s entire commentary “The cult of equity is dying” go  HERE