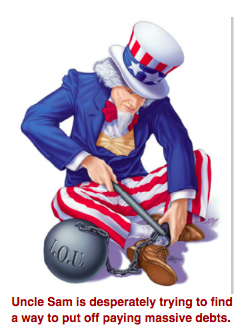 Sovereign debt markets are taking a shellacking. Per a recent Bloomberg article, global bond markets had their worst two-week period in 26-years.

Thing is, it’s just beginning. As I have told you all along, the world is facing a great sovereign debt crisis — the likes of which has not been seen since at the Great Depression.

Back then, virtually all of Europe went bankrupt. Fears of government bankruptcies swept the world, enveloping Japan, China and even the U.S. — even though we were a creditor nation back then.

But this time, it’s going to be a whole lot worse. This time, it isn’t just the countries of Europe that are bankrupt. This time, it’s Europe, Japan and the United States — all bankrupt, all scrambling to come up with solutions to kick the can down the road some more, and all in deep doodoo.

Think President-elect Trump will make a difference and solve the problem? I don’t. Especially if he gets tough on trade, which will demolish our economy. Some think it will cause inflation and thereby erode the burden of our debts.

But that’s a joke. Even if — as some contend — the value of the U.S. dollar went to zero, you would not be able to write off through inflation or even hyperinflation the near $200 trillion Washington owes.

So, get ready. The great sovereign debt crisis of the 21stcentury has started. It’s a financial storm that comes around roughly every 80 years.

It can wipe out anything and everything that gets in its way. To protect your family, your wealth and health — you must have a plan.

The first step in that plan is to not touch sovereign or government bonds of any kind. Or of any country.