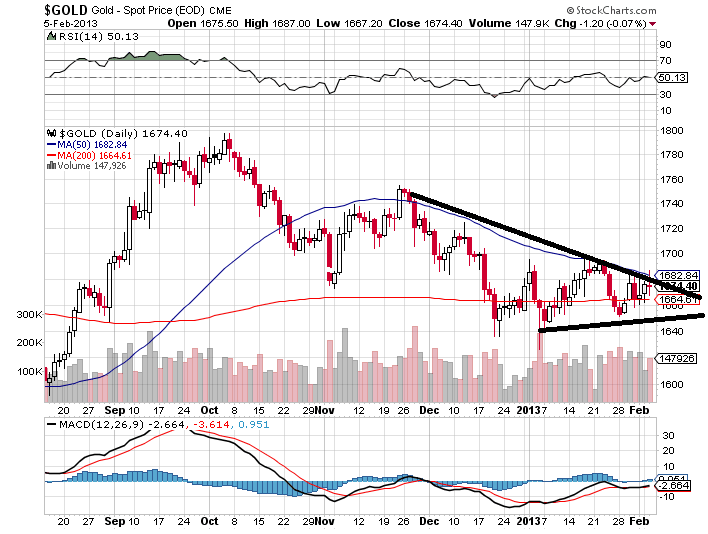 After 30 years playing the markets and watching gold intra-day patterns for far too long, I sense we’re close to a major move. Yesterday was yet another day of scratching one’s head and feeling a sense of manipulation afoot. You just don’t see swift retreats like this right after a nice rally on no news that can suggest such a quick change of heart (except on the CrimeNex). Such moves continue to shake out the speculators.

The spec net long is calculated at the difference between ‘bullish’ long and ‘bearish’ short contracts held by traders such as hedge funds which are classified as ‘non-commercial’, and is regarded as an indicator of short-term sentiment in the derivatives markets.

The number of bears on gold increase daily. Just about the only bullish gold reports come out of by those who make a living trading it.

Finally, Bill Murphy’s comments about Jon “Tokyo Rose” Nadler are most worthy to be the last word on the subject:

“On the demise of Kitco’s Jon Nadler…

One by one the GATA critics over the years bite the dust and disappear from the scene. They are vocal, then gone, never to be heard again to counter what GATA has had to say. The Nadler exit is intriguing. A few months ago his daily commentary was cutback to 2 or 3 days a week instead of daily. Now, he is no longer with Kitco.

I have no idea whether he quit or was fired. But here is what I do know…

*He was at Kitco for as long as I remember and went out of his way to mock GATA, calling us the tin foil hat people

*Although making commentary for a gold dealer, he was ALWAYS bearish and always wrong. I cannot recall one time when he was bullish. Why employ a guy like him who is the most bearish salesman of a product in the history of mankind?

*He went out of his way to report on any development he thought was bearish and brought it to the attention of his readership.

*It did not make sense why an entity that sells gold and silver would feature commentary from someone who was never bullish. From a sales standpoint, it was the most cockeyed setup I can ever recall. I have always liked Bart Kitner, founder of Kitco and still a hockey player, but “The Nitwit” was an arrogant, bizarre fellow, although he did write well as he peacocked around with his pithy attitude.

*The only thing that made sense was the comments over the years from a number in our camp that he sold Bart Kitner on the idea of pooled, unallocated accounts, in which the same gold was sold to numerous investors over and over. The customer would keep his gold at Kitco. Kitco would take the proceeds from various customers on the same gold and use it for investment purposes. Everything would be A OK as long as investors did not ask for their gold to be delivered, at least not too many of them.

*So a major country like Germany asks for its gold back, and now “The Nitwit” is gone. Yet another coincidence? You got me. Perhaps another one I like at Kitco, Daniella Cambone, will let me know what the deal was some day, on or off the record.”