4 Stocks to Profit from the Luxury Auto Boom 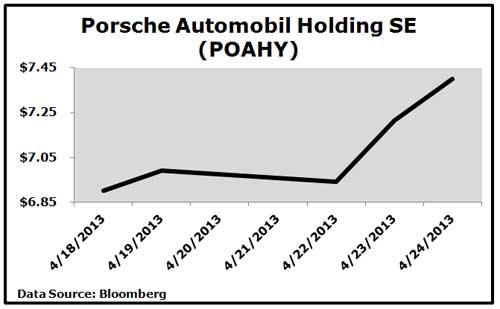 When I was a teenager, I dreamed about owning a Porsche or Ferrari. Of course, that was when I had no cash and even less in the way of brains.

Alas, I will forever be the son of a frugal farmer. So, a Ford or Chevy pickup will do just fine for me, thank you.

But hey, a lot of people feel very differently. Wherever I go in the United States, I see a lot of BMWs, Mercedes, Range Rovers, and other expensive luxury/sports cars.

What amazes me, however, is the number of luxury cars I see in Asia.

The streets of Tokyo, Taipei, Singapore, Kuala Lumpur, Bangkok, Shanghai, and Beijing have just as many — if not more — of those high-priced luxury/sports cars as any city in the United States.

That’s quite a change from 20 years ago when the primary mode of transportation in China was a bicycle. Those days are long gone, and a whole new era … and the whole new set of investing opportunities that come along with it … is upon us.

Today the streets of major Chinese cities, such as Beijing and Shanghai, are so clogged with cars that it can take hours to travel just a couple of miles.

In fact, China is now the largest auto market in the world, and car-makers from all over the world are tripping over each other to get into China.

Those carmakers gathered at the 2013 Shanghai Auto Show, the largest event of the year for the automobile industry.

Yup, you read that right — with 1,300 cars showcased this year, including the debut of more than 100 new models, it’s even bigger than the Detroit Auto Show!

China has been the leading auto market in the world since 2009. But consulting firm McKinsey & Co. predicts it is going to get even-bigger.

Some 200 million Chinese have driver’s licenses, and McKinsey expects auto sales there will grow by an average of 8% a year between now and 2020.

But even though the typical car buyer is about a decade younger than his or her U.S. counterpart, as the CEO of Jaguar Land Rover told CNBC last week, they’re not intent on buying old beaters or simple models to get them from Point A to B.

Instead, they want something that screams “status car,” to reflect their growing incomes and the place in society they’re increasingly occupying.

That’s why China’s luxury-vehicle market is where the big bucks are being made. And that’s a market you can easily tap into without putting a single mile on your own car!

Every carmaker in the world — including Rolls-Royce, Porsche, Ferrari, Bentley and Lamborghini — from 20 countries flocks to Shanghai for good reason: to get in front of China’s growing pool of potential buyers.

McKinsey expects luxury cars sales to grow by an impressive 12% a year over the same period.

This leaves the potential for them to go even-higher because “Demand outstrips supply for our vehicles,” said Klaus Maier, the president of the China Mercedes-Benz division, as he recently told Bloomberg.

If you want to tap into the luxury auto boom, there are several ways to do so. Here are four “options” that could pick up some serious momentum …

BMW, by the way, also owns the Rolls-Royce and Mini brands.

Option #2: Porsche (POAHY.PK). The younger Chinese millionaires prefer speed over comfort, and Porsche is making a killing in China.

Not surprisingly, Porsche just announced that it enjoyed its best March EVER in company history.

Plus, Porsche has a nice kicker in that it owns 18% of Volkswagen, so you get both VW and Audi exposure when you buy Porsche stock. Even though these higher-end vehicles may cost a pretty penny, that doesn’t mean they won’t require some serious upkeep over the years.

And so, you may want to look toward a pair of Chinese auto parts stocks that are traded in the United States on the Nasdaq that could benefit from China’s car-buying boom:

Of course, as we discussed earlier this week, China’s economy “only” grew by 7.7% in the first quarter. So all the doomsayers are keeping a close eye on whether consumers are saving or spending their money.

But when it comes to luxury items like cars that many newly affluent citizens crave, I expect any potential shift in sales figures to be a mere pothole on the way to higher stock prices.

In fact, my Asian Century subscribers recently closed out a 100%-plus gain in just about eight weeks in an Asia-based car-maker. And just this week, I recommended another name that caters to a wide variety of Chinese and other global car buyers.

This stock is already in positive territory, and my research tells me it’s on the right track to zoom higher!

As always, if you’re doing this on your own, you need to do your homework and decide whether any of these securities are appropriate for your personal situation.

But as you know, timing is everything when it comes to investing. And there’s still time to get in on this new position in my trading service, The Asian Century. Click here now to claim your risk-free trial membership today! Related: Supercars.net & The 2013 Shanghai Auto Show, the largest event of the year for the automobile industry.

P.S. To get all the names of my favorite stocks — what’s working today AND what to buy as Asia’s growth continues to explode — get on board with all the profit opportunities The Asian Century offers today. Click here to get started right away!

Tony Sagami is the editor of The Asian Century, a trading service designed to help investors profit from the seemingly unstoppable Asian consumption machine. He helps his subscribers tap into this potential through a variety of easy-to-execute strategies on global companies that trade on the U.S. exchanges that also do big business in Asia. For more information on The Asian Century, click here.

Tony is also the editor of International ETF Trader, where he shows members how to make money from trends taking place all over the world in areas like natural resources, gold, oil, commodities, tech, consumer goods and even in individual countries themselves.