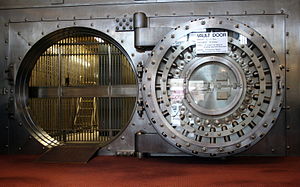 Despite the well-engineered ‘bear raid’ conducted by some U.S. banks together with some hedge funds –which knocked the gold price back on its heels down to $1,344—the demand for gold from all over the world remains unabated. The fall in the gold price caused the physical buying of gold to surge everywhere and the gold price has begun to recover. “Where does one hold their physical gold?”

More to the point, where does one hold one’s gold away from institutions and governments that may want to keep your gold. We’ve seen depositors funds confiscated from banks in Cyprus, so the prospect of gold being confiscated is now on the screens of gold investors. So where does one hold gold to avoid this probability? This is not just a vague fear but a real danger. It is insufficient to wait until the dollar collapses. That would be far too late!

This was emphasized by a recent report we saw implying that Switzerland was not allowing the redemption of gold. The report was baseless (see below).

Switzerland as a Financial “Haven”

Old money and new money from the world over, store their wealth in Switzerland, as they’ve done for the last three centuries in the face of many wars because Switzerland has remained neutral for all this time. You would think that such a small nation would not be able to resist an onslaught from its European neighbors. In fact there have been no attempts to assault the tiny nation. Not only is Switzerland a nation with an impossible terrain for armies, it has an army (mainly reserves) of over a million soldiers ready for action at any time in a well-trained state of readiness. Its complex of bridges and tunnels, which link it with all the different parts of Europe and allow its own people to travel through the nation, is mined with explosives that will make it impassable should it be invaded.

As a result its refuge for capital is 300 years old and its banking industry 5 times the size of its own GDP stretching all over the world. It has been tried and tested in war and in peace like no other nation. It’s this testing that is critical for investors. If they feel another country would be a better place to store wealth out of reach of their authorities, then they would have to question the robustness of its resolve against any other country’s attempts to dominate their sovereignty. Switzerland’s history on this has proved robust.

Of late, the multi-national companies in the financial industry in Switzerland and particularly private vaults have been rejecting U.S. taxpayers as clients. This is because the U.S. IRS alongside the new tax regimes and reporting requirements under FATCA and FBAR are invasive in attacking such taxpayers. The experience of UBS and the IRS brought a change in Switzerland that expanded their view of criminal wealth (which they don’t accept) to include Tax Evasion. But nothing else has changed there and the attempt to expose U.S. citizen’s bank accounts there brought the revealing of only 4,500 names out of the 45,000 U.S. citizens in UBS. This meant that 40,500 U.S. citizens were not guilty of Tax evasion and so their names were not revealed to the IRS. This showed the resolve of the Swiss government to retain Swiss secrecy in their financial affairs.

The other day a report was issued by some respected members of the gold community that a Swiss Bank has refused to redeem/repatriate gold above 200,000 Swiss francs and the central bank had instructed them not to do it because it has to do with anti-terrorism and anti-money laundering precautions. We realized just how important such a possibility could be to gold investors so investigated its accuracy. It turns out that it was entirely false.

Reputable Vaults in Switzerland have informed us that they have not had any such instructions from the Swiss National Bank and that they continue to redeem/repatriate gold on client’s instructions.

Let’s be clear, if such a report was accurate it would have made headlines the world over. We are certain that the reputable vaults in Switzerland would inform the world, if the Swiss National Bank had issued such draconian regulations because of the deep impact of such news would have on the Swiss economy.

If a Swiss bank has told a client that he may not redeem/repatriate his gold, then the issue is between that bank and that client and nothing else outside these two.

We repeat that the Swiss National Bank has not issued such an instruction. Indeed we are of the opinion that Switzerland would be the last nation to introduce such Capital Controls, if ever.

But other nations are being recommended as a “Safe Haven” for investor’s gold such as Singapore, Canada and Hong Kong. The first point we would make about this is that none of these nations have a history of protecting clients’ assets. Such protection would be an unintended accident and would change, if government interests felt it should. Believing that their assets would be protected by government from foreign government pressures is an assumption that should not be made until tested.

But let’s look at Canada as a “Safe Haven” as this is perhaps the favorite of U.S. citizens.

Canada as a “Safe Haven” in Extreme Times

Before discussing the ways you can hold your gold in Canada, we feel it important to look at the nature of the country itself and particularly with regard to the U.S.

The first point that comes to mind is the dependence Canada has on the U.S. Canada could not survive independently of the U.S. in economic terms. There is a high degree of integration with the U.S. economy, so much so that should extreme times hit Canada, it will follow the direction of the U.S. We believe that it will not fight to hold off such pressures but willingly go along with U.S. interests. Certainly when it comes to financial policies, Canada will not walk a separate road to the U.S.

In extreme times we expect there to be a need to bring gold within the control of the central banks to support the existing monetary system. While Canada currently has very little gold having sold it off [3.2 tonnes] at 0.2% of its reserves, it is dependent on the U.S. dollar in its reserves. To us, this makes Canada a monetary satellite of the U.S.  In turn, this makes it clear to us that Canada will make little to no efforts to ensure the U.S. does not interfere with U.S.-owned assets. History supplies evidence of how Canada has as recently as 1974 cooperated with the U.S. in attempting to return U.S. citizens gold back to the States. [http://personalliberty.com/2010/02/03/the-war-on-gold-a-personal-account/]

More importantly if the U.S. did decide to bring its citizens gold into government coffers, would Canada act any differently? We believe that if the U.S. felt the need to do this today, Canada would feel it too.

Canada has gold producers, so could easily buy the gold from these producers entirely and pay them market related prices to do so as is now the practice in Kazakhstan.

In addition, the institutions that held gold for clients would be targeted too. After all, this is where the largest holdings of physical gold are most accessible and so, primary targets. With banks being the Custodians of these institution’s gold, the government would simply instruct the custodian to hand over the gold it held on their behalf. The banks would comply immediately, as this would allow them to keep their banking license. The owning institutions would then be informed of the event.

Security and storage companies in Canada would also be targeted and would be happy to comply to keep other facets of their business. Swiss Vaults are rejecting U.S. Taxpayer clients for this very reason. They want to remove their vulnerability to government actions entirely. Sadly, similar Canadian companies would not be able to move their gold to another Jurisdiction and be forced to comply with U.S. and Canadian government demands.

As a result, for the many reasons given, Switzerland remains the only credible “Safe Haven” in extreme monetary times.

Hold your gold in such a way that governments and banks can’t seize it!