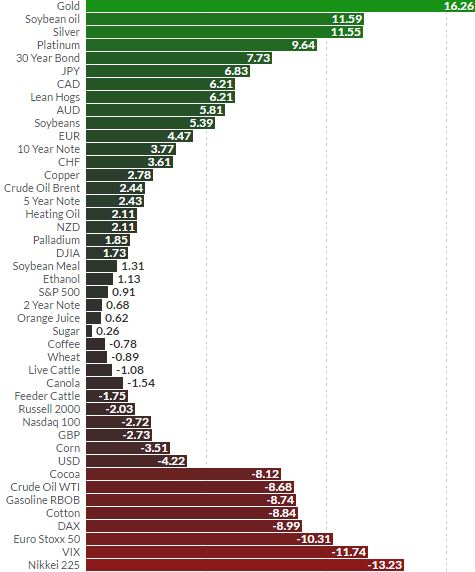 Gold prices gained 16% in the first quarter and had their best quarterly performance since 1986. Gold made gains due to continuing ultra loose monetary policies, diminished U.S. rate-increase expectations, worries about global economic growth, both U.S. and global geopolitical concerns and turmoil in markets.

Most of the gains came in the first six weeks of the year when market turmoil was at its worst and sharp falls were seen in stock markets. For the quarter, the S&P recovered from losses and eked out a 0.9% gain, the DJIA was 1.7% higher while the Nasdaq 100 fell 2.7% on concerns of a new tech bubble. European stocks had a torrid quarter with the EuroStoxx 50 shedding 10.3 percent and the DAX down 9%. The Nikkei crashed 13.2% in the quarter as the Japanese economy showed little signs of recovery and indeed looks on the verge of a depression.

The dollar logged its worst quarterly performance since 1990 as the Federal Reserve slowed the expected pace of interest rate hikes, citing worries about the potential domestic impact of very weak global growth.

Sterling was the weakest major currency in the world and the British pound weakened 2.5% against the dollar and 20% against gold over the course of the quarter as worries about a possible U.K. exit from the European Union led to traders selling sterling aggressively.