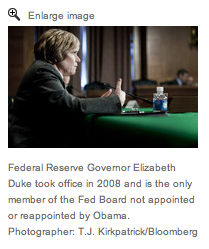 Bernanke Is Losing Control of the Fed and the Markets (one Fed Governor has already resigned in the last 24 hours).

Ben Bernanke has lost any last shred of credibility he might have had.

The Fed no longer believes in QE. And for good reason. We’ve seen QE 1,2,3,& 4 and yet we’ve not seen any meaningful uptick in employment or GDP growth. Indeed, since Bernanke took the reins at the Fed we’ve not seen a single year of 3+% GDP growth.

In this light, several Fed members are no longer fans of QE. Some of them want it tapered soon. In fact HALF of them want QE STOPPEDcompletely by the end of 2013.

And yet, Bernanke decided that despite this dissent, he should make a speech stating that “highly accommodative policy” should continue along with the usual claims that inflation is under control.

These were the words of one man, not the Fed.

The markets exploded higher on Bernanke’s comments while the Dollar collapsed. And Bernanke now has a mutiny on his hands (one Fed Governor has already resigned in the last 24 hours).

Given that the Fed has been the primary driver of just about everything for the last five years, a fractured Fed is very bad news for the markets. Sure, we will see prices spike in the near term on Bernanke’s comments, but he has made it clear, point blank, that he has lost control of the market and really doesn’t have a clue what he’s doing.

This man knows only one thing: bubbles. Congratulations Bernanke, you’ve created an even bigger bubble than that of 2007. Your latest statements about providing liquidity have destroyed completely destroyed your credibility as Fed Chairman. And they’ve bought you at most a brief pause before this whole mess comes crashing down.

The entire environment feels just like 2007 again. The only difference is that this time everyone knows that we’re on shaky ground and has an eye for the exits. And in this mess, Bernanke announced nothing new, but simply stated that he remains a money printer.

The Economic “Miracle” Has Failed… What’s Next For the Markets?