Rothschild’s Understanding of Gold vs Bernanke’s 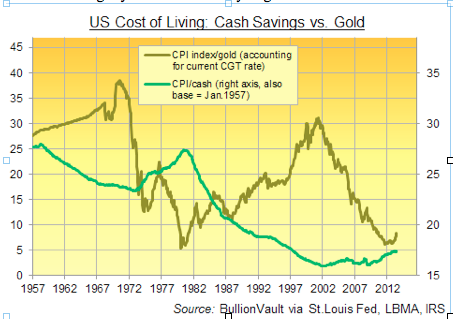 “I know of only two men who really understand the value of gold,” Rothschild reputedly joked in the mid-19th century – “an obscure clerk in the basement vault of the Banque de France and one of the directors of the Bank of England.

BEN BERNANKE, today’s most powerful banker, said this week that nobody really understands gold prices, including himself. Victorian Europe’s richest man, and bullion broker to the Bank of England, N.M.Rothschild at least took the trouble to check.

“I know of only two men who really understand the value of gold,”Rothschild reputedly joked in the mid-19th century – “an obscure clerk in the basement vault of the Banque de France and one of the directors of the Bank of England.

The US Fed chairman in contrast shows only a cursory interest in gold. That’s despite being an economic historian (and 3,000 years of history say people buy gold as a store of value) as well as sitting on top of the world’s largest hoard (the New York Fed vaults some 6,700 tonnes for both the US and foreign governments. The United States’ own gold reserves total 8,133 tonnes – some 5% of all the gold ever mined).

Asked in Congress on Thursday, however, why 2013 gold prices have fallen 25%, Bernanke was in fact close to an answer. “People are less concerned about extreme outcomes,” he said, “and therefore they feel less need for whatever protection gold affords.”

This drop suggests “people have somewhat more confidence. [So] the gold price going down is not necessarily a bad thing.”

Rothschild’s obscure clerk might well agree, at least with regards to Western investors. People buy gold, and drive the price higher, when they fear bad things ahead. War, financial crisis and stockmarket crashes…such horrors make rare, indestructible gold appealing like nothing else. (The US government’s own hoard confirms that.) But five years after Lehmans collapsed, many investors are now bored with the crisis. That makes gold – proven crisis insurance – look boring as well.

Asian households, on the other hand, buy gold whenever they can. So their rising incomes mean India and China now account for one ounce of gold in every two sold worldwide. And not understanding gold prices today starts with ignoring Asia’s rapid ascent.

Ben Bernanke was also half-wrong to say people buy gold as an “inflation hedge”. Because he missed the equally big role played by interest rates – and that’s a telling blind spot. After all, the Fed chairman slashed the returns to cash to zero. More than four years later, he promises to hold rates at zero “for an extended period” in future as well.

This might not matter if inflation stayed “low” as he keeps claiming. But when inflation overtakes interest rates? Gold tends to rise in value when cash savings fall in real terms. That’s been as true under the free-floating prices of the last 42 years as it was under the 19th century’s classical Gold Standard.

Put another way, if inflation is rising faster than your savings are growing, your cost of living would be falling if you held that money as gold instead. Since Richard Nixon cut the Dollar’s last formal ties to gold backing four decades ago, the official US cost of living index has outpaced US savings rates in 198 months. Gold prices have risen in 163 of them, gaining an average – in real terms and after accounting for today’s US capital gains tax – of 14.2% per year. That made the Consumer Price Index fall for gold-owning savers.

The reverse is true too (and again, in the main. We’re as tired of saying you can’t time real rates and gold as everyone else is of hearing it). In those 305 months when cash savings grew in real terms, gold lost value almost two-thirds of the time, dropping an average 4.0% from a year earlier and so making life more expensive for gold-owning savers.

Yes, the plunge in gold prices this year far outweighs the steadying cost of living for bank savers. But no one said fighting the Fed would be easy, or cheap. And the lesson for central bankers meantime?

Back in the 19th century, if people began exchanging their paper money for gold, central banks would raise interest rates, defending the value of cash and encouraging savers to stay in paper instead. With that convertibility long gone, however, central banks now have what Bernanke calls “flexibility” – the ability to keep rates below inflation, and even create more money at will. This bid to boost the economy comes at the expense of cash savers. So when people choose to buy gold in the 21st century they are signaling in fact the “success” of US Fed and other central-bank policies.

No doubt Ben Bernanke understands that more than he lets on. Savers would do well to understand his repeated desire for higher inflation. Never mind understanding the aims of his likely successors.

Adrian Ash is head of research at BullionVault – the secure, low-cost gold and silver market for private investors online, where you can buy physical gold and silver ready-vaulted in Zurich or Singapore for just 0.5% dealing fees.

Please Note: This article is to inform your thinking, not lead it. Only you can decide the best place for your money, and any decision you make will put your money at risk. Information or data included here may have already been overtaken by events – and must be verified elsewhere – should you choose to act on it.