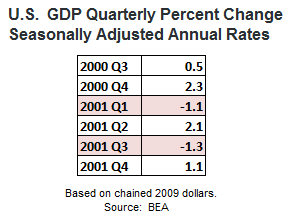 As we noted in a recent “recession odds” article, bear markets typically are caused by one of two things: a recession or tight monetary conditions. For example, the 2000-2002 bear market featured a rough economic period in 2001 (see table below). The chart below shows a period in 2001 that featured a 27% drop in the S&P 500, which even in isolation crossed the widely accepted 20% threshold defining a bear market. The big drop occurred during the period of weak economic growth as shown in the table above.