Be ready to pull the trigger 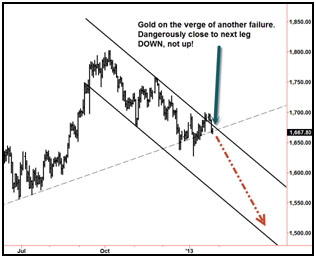 “Gold is on the verge of another failure, dangerously close to another leg Down not UP” – Larry Edelson

Bankrupt Spain. Greece. Italy. France going down the tubes. Britain on the edge of its third recession since 2008, with its fourth-quarter 2012 GDP contracting more than expected.

Washington in debt past its eyeballs, and desperate. So much so, it’s acting as though the debt doesn’t exist at all — once again kicking the issue down the road, this time to May 18. And more. And gold is now nearly $257 below its all-time record high. It can barely rally.

Every time it does, the rally fades away and now, the price of gold is dangerously near an important weekly sell signal on my systems, which stands at $1,657.

I would love nothing more than to tell you that gold has finally embarked on its next leg up to $5,000-plus.

But the fact of the matter is that there is no evidence that it has. Period.

In fact, gold is telling you exactly the opposite: That there isn’t even record demand for gold right now. That instead, demand is actually slumping.

That more debts are about to be liquidated than the central banks can offset with money-printing.

And that inflation has not yet broken out to the upside.

That’s why I’m sticking to what my models say: The next phase of gold’s bull market (and all commodities for that matter) — is not yet here.

Which is precisely why I’m still not ready to stick my head out and load up on more gold. Nor should you.

My forecast — despite all the hate mail and pressure I get to change it — has also not changed: Based on my systems and models, I will not turn bullish again on gold until either …

I know that’s not what you want to hear. I know that you are as eager as I am to see the next leg of gold’s bull market begin.

I know that you want to buy more gold, load up on it and ride it to glory over the next few years. So do I.

So what is gold really telling us? With all the money-printing going on, why hasn’t gold broken out yet?

With busted governments in Europe, why isn’t gold rallying?

With new war threats coming in from North Korea and from terrorists, why isn’t gold flying to the upside?

Why, in the face of all that, is gold instead dangerously close to issuing another weekly sell signal on my systems, and threatening to plunge anew?

To those of you looking for a fundamental explanation, the reasons are simple:

First, money-printing — even when virtually all major central banks are doing it — means nothing when most of the money being printed is merely ending up sitting in the banks. I’ve said that before and it’s still largely the case.

It means consumers aren’t interested in adding to debt by increasing their borrowings and credit lines … and the velocity of money, or its turnover, is virtually non-existent.

Ditto for corporations that are conserving cash and largely paying down or refinancing debt rather than taking on new debt. Or choosing to buy back their own shares.

Second, fears of North Korea’s recent threats or renewed terrorist uprisings are — at this time — also actually suppressing gold. It’s causing just enough geopolitical uncertainty to put savvy investors in a “cash mode” of thinking … and not quite enough uncertainty to drive them directly into gold.

And based on my work, that’s not likely until later this year. And from much lower prices in gold.

I know that’s difficult to understand. But do listen to the markets and what they are telling you. The markets, I repeat, are never wrong. Only the interpretations and expectations are.

So stay the course. Build up your stash of cash ammo so that when it does come time to pull the trigger on gold again and back up the truck, you will be able to.

Ditto for silver and other natural-resource and tangible-asset investments. While their time to shine is not here yet, it will come again, I assure you that.

You want to be fully ready and able to capitalize on these forces. If you listen to the pundits who proclaim the next bull market is here every time gold rallies $5 or $10 … or even $25, you won’t be ready. You’ll be far more likely to suffer massive losses. Ditto for silver.

Stay the course, build up your ammo, and be ready to pull the trigger when I issue a headline like “Back Up the Truck, NOW!”