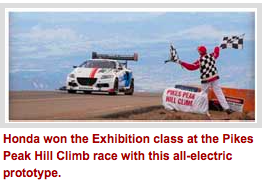 Say what you will about “green cred” — the social brownie points awarded in certain areas of the country for driving a battery-powered Nissan Leaf or Toyota Prius plug-in — but electric vehicles outside the Tesla Model S have a dowdy image. I mean, you can’t imagine James Bond pulling up to a casino in a Chevy Volt.

In an industry that is built on horsepower braggadocio and sexy sheet metal, that image has limited electric vehicles’ market penetration.

Electric cars are just an ion in the bucket. For an industry that needs unit volume to lower battery costs, increase range, and widen their market penetration, these numbers need to get better. The good news is: There are signs another wave of excitement for battery EVs is coming. Did you see the wild battery-powered racecar Honda used to win the Exhibition class at the Pikes Peak Hill Climb race? The wining overall time was set by an all-electric prototype — a first for the event. The event marks a turnaround for Honda, which had been hesitant to develop battery-electric vehicles due to cost concerns. They’ve turned their opinion around; with company chief exec Takahiro Hachigo saying they will “evolve products that use electricity as a core technology.”

Honda has announced it is working on a new lineup of vehicles including an all-new battery-electric model and an all-new plug-in hybrid model by 2017.

New models of the iconic Nissan Leaf and Chevy Volt are coming — with extended ranges as battery technology improves pushing down cost-per-kilowatt — while General Motors is working on bringing the 200+ mile Bolt concept into production. Tesla’s been busy too, with the upcoming SUV Model X expected to double the company’s sales according to CEO Elon Musk, who with the help of the $35,000 Model 3 is hoping to move 500,000 cars by 2020.

Not only will this be great news for Tesla, which has recently moved to test its record high from last summer near $290, but other companies in the EV ecosystem like Johnson Controls (JCI), which makes lithium battery packs; Kandi Technologies (KNDI), which makes mini EVs in the Chinese market; and Delphi (DLPH), which makes chargers, battery-pack systems and voltage-wiring systems. Put these stocks on your radar.