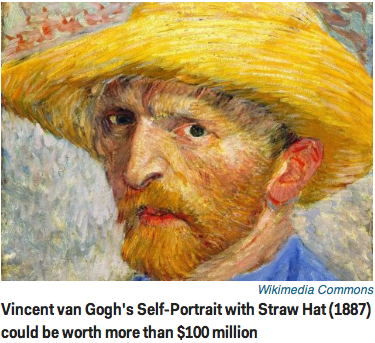 Detroit’s bankruptcy cites more than $18 billion in debts, but the city has one asset that could help its balance sheet considerably: its art collection.

The Detroit Institute of Arts has one of the nation’s oldest and most valuable public art collections, with pieces by Vincent van Gogh, Henri Matisse and Rembrandt van Rijn. Experts say the collection is easily worth more than $1 billion.

In May, the city’s emergency manager, Kevyn Orr, sparked an uproar when he requested an inventory of the collection. Orr’s spokesman, Bill Nowling, told reporters that while Orr doesn’t want to sell the collection, all of the city’s assets had to be valued and considered as part of its financial plan.

“We have to look at everything on the table,” he told the Detroit Free Press in May, adding that the city has a “responsibility to rationalize all the assets of the city and find out what the worth is.”

Local cultural supporters and museum groups say selling any of the collection would be a crime. The Institute issued a statement after the bankruptcy filing that said it is “disappointed that the emergency manager determined it was necessary to file for bankruptcy.” It added that the “collection is in trust for the public and we stand by our charge to preserve and protect the cultural heritage of all Michigan residents.”

At the moment, it appears the state agrees. Michigan Attorney General Bill Shuette said, in a statement, the Detroit Institute of Arts’ collection is held by the city in a charitable trust for the people of Michigan. He said “no piece in the collection could be sold, conveyed or transferred to satisfy debts or obligations.”

What’s more, experts in art law say that many of the pieces in the Institute were bequests from wealthy collectors that could contain restrictions on their sale.

Still, bankruptcy experts said the collection’s fate could be determined by a bankruptcy court. While creditors can’t force the city to sell any particular asset under Chapter 9, they can reject a plan that they conclude doesn’t include sufficient asset sales or payments.

“We can’t ask for the art to be sold, but we can ask for more asset sales and then it’s up to the city,” said one attorney representing Detroit’s creditors.

While the museum, which is expected to draw more than 500,000 visitors this year, is owned by the city and is funded with support from a special tax from three counties that’s expected to raise about $23 million a year for the next 10 years. Residents who pay the tax get free admission.

Among the museum’s top works is a Van Gogh “Self Portrait” from 1887. Experts said it could be worth more than $100 million. A Van Gogh self-portrait sold at auction in 1998 for $71 million, but prices for top art works have soared in the past decade.

(Read More: Art Is the Next Gold: Novogratz)

The museum’s other classics include Rembrandt’s “The Visitation,” James Whistler’s “Nocturne in Black and Gold,” and “The Wedding Dance” by Pieter Bruegel the Elder, as well as works by Claude Monet, Matisse and Caravaggio.

This story was originally published by CNBC.