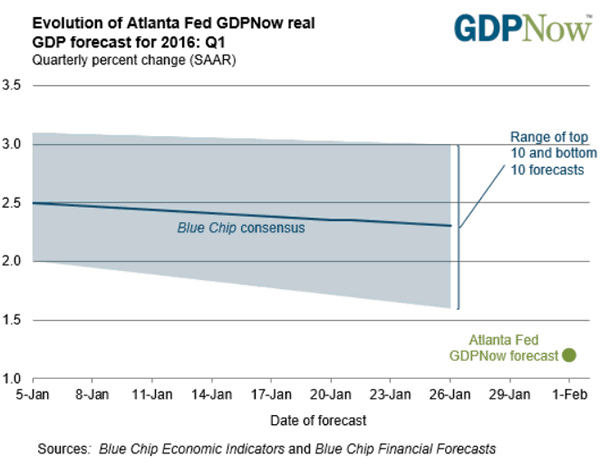 Another Monday, another set of “surprisingly” bad economic numbers. A few representative headlines:

There’s more, but you get the (very dark) picture. And thanks to the Atlanta Fed’s GDPNowprogram we can see in real time how these numbers translate into current-quarter GDP growth. Apparently the US is looking at yet another weak stretch in which economists (represented by the Blue Chip consensus) are gradually forced to admit that they’ve wildly overestimated our ability to manage our debt. GDP growth matters for a couple of reasons. First, an economy that’s borrowing a lot of money (as all the major ones are) has to generate large amounts of new wealth or it sinks ever-deeper into a hole that eventually leads to a 1930s-style depression. 1.3% growth does not come close to stopping the expansion of debt/GDP. So every quarter like the current one brings a debt-driven collapse that much closer.

Second and far more interesting in the near-term, slow-growth/high-debt countries eventually conclude that their only remaining option is massive currency devaluation. Europe and Japan are already there, and are aggressively ramping up their own currency war offensives. The US, if history is any guide, will soon (either this year or as part of the next administration’s “first 100 days” political offensive) decide that a too-strong dollar is standing in the way of “progress” and will start looking for ways to devalue.

Then the real fun begins — at least for goldbugs. For holders of dollars it won’t be nearly as pleasant. Here’s the Canadian version of what’s coming for US investors, though the US chart will be steeper and will go on for years instead of months: