As Good As It Gets… For A Buy 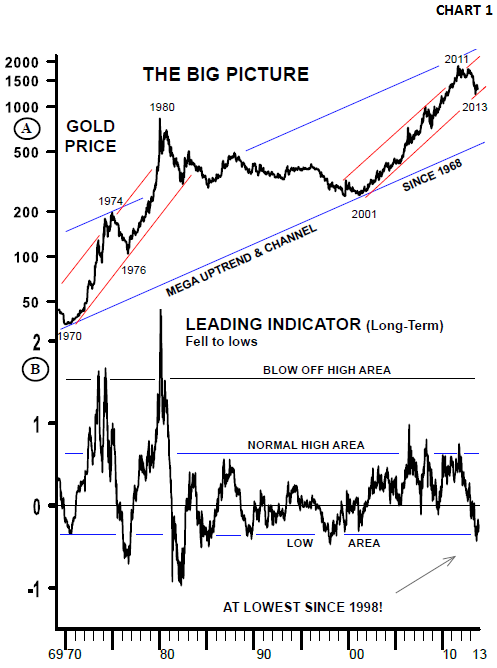 Many events moved the market this month.  Gold demand was stable but more important, gold is getting a boost from the weaker U.S. dollar.

The U.S. dollar is now clearly bearish, and since gold and the U.S. dollar generally move in opposite directions, this is very bullish for gold.  So is the fact the Fed’s QE stimulus is currently expected to continue well into 2014.

Plus, gold tends to rise every time Congress raises the U.S. debt ceiling. And with the debt ceiling recently lifted, gold is indeed looking upward.

While gold has been much stronger than most currencies over the past 12 years, it still hasn’t compared to the grand rise in the 1970s. As you can see, gold’s leading indicator reached a normal high area during the 2001-2011 rise. But the spike peaks to blow off high areas seen in the 1970s are still to come.

However, the troubled world we live in is proving plenty of ammunition to say a rise similar to the 1976-80 rise could still be ahead of us.

In addition, gold’s leading indicator is currently at a major low area. In other words, gold is bombed out and very oversold, reinforcing the likelihood of an upcoming sustained rise.

For now though, we’ll take gold’s renewed upmove one step at a time…

Much will tell us the direction over the next month or two.  We’re currently in a seasonally strong month for the metals and a rise, even if it’s not a strong leg upward, should continue to be promising.

This is where gold timing comes in.

Gold has been forming a good looking base since reaching its closing low above $1200 on June 27.  And it’s becoming more important for this low area to hold (see Chart 2A). As long as it does, the market will be fine.

This is a key level.  It’s the old support and the 65-week moving average.

If gold fails to break above this level, the bear will not be out of the woods. But if it’s clearly surpassed, we could then see the $1700 level tested and possibly the old highs revisited!

Mary Anne & Pamela Aden are well known analysts and editors of The Aden Forecast, a market newsletter named 2010 Letter of the Year by MarketWatch, which provides specific forecasts and recommendations on gold, stocks, interest rates and the other major markets. For more information, go to www.adenforecast.com