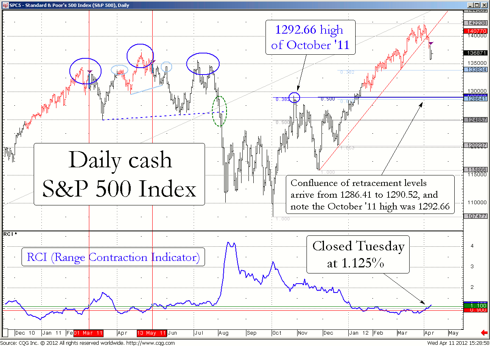 As mentioned in Monday’s article, when the RCI closes back above 1.1% (after first closing below 0.9%), it suggests continuing daily range expansion – which usually, but not always – is associated with strong bearish moves.

Again this is an indicator, not necessarily an entry signal. But if asked where should a stop be placed if one were to use it as an end-of-day short entry, my answer would be either just above the high of the day in which the signal was generated (today’s high of 1383.01); or for a more lenient stop, above the recent high (above the 1422.38 high). As far as downside objectives, the 1286 to 1293 area figures prominently. From Tuesday’s close of 1358.59 down to 1293 (the first significant support point), this would be just under a 5% decline – still a very reasonable correction given the near exponential rally from the mid-December lows.

The only Fibonacci retracement level that I feel has more significance than a flip of a coin is the 50% level. But when a number of retracement levels as well as other technical points cluster around a particular area, then that reoccurrence and reinforcement becomes noteworthy.

The S&P correction can certainly segue into a uniformly bearish trend and trade lower than 1286, but for now this level is one of the most significant near-term objectives/support level.

Disclosure: I have no positions in any stocks mentioned, and no plans to initiate any positions within the next 72 hours.