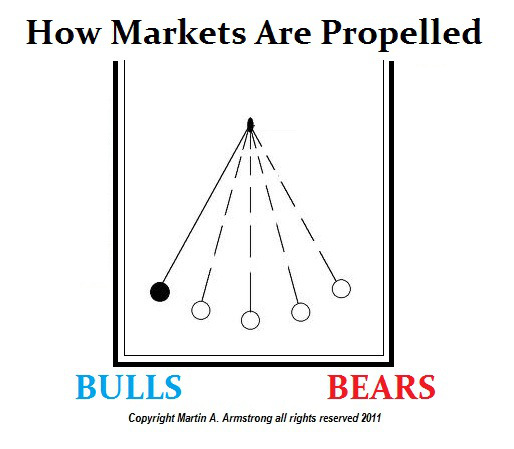 The rise in gold coin demand at the Australian Perth Mint and the US Mint as well as in Canada demonstrates the underlying long-term bull market should remain intact. It is coin rather than bullion you should stick to when you are talking about physical purchases.

Nevertheless, from a market perspective, the gold bounce is still not impressive. The first layer of technical resistance begins at 1475 up to 1545. However, we need to see a daily closing above 1592 just to relieve the broader selling pressure. Ideally, the high in 2011 should be followed by a low in 2013 with a rally thereafter into 2017 that will not become a phase transition until AFTER the ECM turns in 2015.75.  Keep in mind that as the pendulum swings back and forth, each time the momentum is building producing greater volatility. The weather is doing the same thing as we move into the peak of this NATURAL global warming cycle. This means when the ECM turns down again, this will produce even higher volatility than what we saw in 2007-2009 period. Also, that decline was focused in the real estate and banking. This turn will be governments. That is the entire purpose of gold – the hedge against government – not inflation.

The Market & Cycles – Why We Must Crash & Burn

One Response regarding this problem that we must crash and burn states that this “is somewhat of a paradox though, see some people, not so conflicted by their personal conscience (against obedience to authority / control ), but influenced by their uncertainty and/or lack of confidence. obviously, not all people are the same. Guess for the higher circumscribed step, to a world Government, should always pass through crash and burn stages, as history dictates, can never take the step smoothly:) ?

ANSWER: This is what makes cycles function. (1) there is the overall cycle of the economy such as the ECM, (2) then there are the cycles of individual markets that each has its own unique frequency like DNA, and finally (3) each of us has a personal cycle of life through which we pass, mature, and hopefully learn from our mistakes.