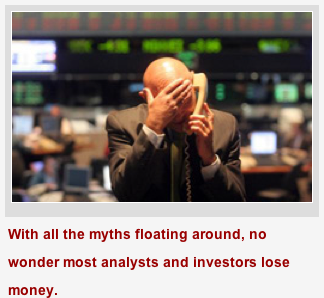 I’m simply referring to all the market myths that are about to be busted, by the markets themselves, and how so many analysts and investors are going to get caught with their pants down!

After all, there are so many market myths out there, that it’s not surprising the majority of investors lose money. They’ve been taught a whole bunch of garbage by talking heads in the media … by ignorant analysts who have never done their homework … And by brokers who only want to move your money around, regardless of whether you make money or lose money, but do it all via the easiest sales pitch they can come up with. And very often this is based on misguided information.

So today, I’m going to cover just three of the many myths that are about to be busted, yet again, by the markets. That way, you’ll be prepared to make money rather than lose money, and you’ll be able to fend off all the misinformation that’s out there.

In future Money and Markets columns, I’ll bust even more myths for you. With that said, let’s get started …

If you’re like any average investor, you’ve heard that theory literally hundreds, if not thousands, of times before. Tune into any media show today, and I’m sure you’ll hear it a dozen or more times in the course of a single day.

But the fact of the matter, the plain truth, is that it is precisely the opposite that is true. Rising rates are positive for stocks, and declining rates are not.

From March 2000 to October 2002, the Federal Funds rate declined from 5.85 percent to 1.75 percent, and the Nasdaq plunged 78 percent. Put simply, stocks and interest rates went down together.

Then the markets collapsed ? and so did interest rates, to record lows.

From August 1929 to July 1932, the Fed’s discount rate fell from 6 percent to 2.5 percent, and the Dow Industrials plunged a whopping 87 percent.

The fact of the matter is that the relationship between interest rates and stock prices is exactly the opposite of what almost everyone, even the pros, preach.

A little logic teaches you why. When the demand for money and credit is increasing, no matter what the reason, so is the cost of money (interest rates).

And when demand and the cost of money is rising, stock prices should also do well.

Conversely, when an economy is sliding, the cost of money is also falling, as demand for credit contracts. Makes sense then that stock prices should also be weak, right along with the deflating cost of credit.

Very logical, right? But oh, how so very wrong almost all analysts and investors are when it comes to interest rates and stock prices!

Right now, for instance, almost everyone is telling you that if interest rates go up, that spells the death knell for stocks.

But rates have been going up and the Dow Industrials and the S&P 500 are hovering just below all-time record highs.

Meanwhile, other indices such as the S&P MidCap 400 and the Russell 2000 Index are already at record new highs.

The fact of the matter is that we are entering a period where capital is on the move again, in its endless search for a return on investment.

It’s not to be had right now in the sovereign bonds of Europe’s busted countries, in Japan, or in the U.S. ? so naturally, there’s tons of money heading into equities.

So simply keep in mind the following: The biggest, strongest equity bull markets have always occurred in a rising interest rate environment.

Myth #2: Rising oil and energy prices are bearish for stocks.

Just like the myth about interest rates, we’ve all heard this one before, many times too. The claim: The increasing cost of energy is a tax on consumers and squeezes corporate profits as well. Therefore, rising energy prices are bearish for stocks.

Makes sense, right? But consider this: There is no consistent relationship between energy prices and stock prices.

Sometimes energy prices are rising along with stock prices, and sometimes they decline together. The myth exists simply because the oil crisis of the 1970s still remains fresh in many investors’ minds. And for those who were too young at the time, because that’s what’s taught to them (wrongly): That rising oil and energy prices kill stock prices. The historical relationship between energy prices and stock prices tends to lean more towards a positive correlation.

Just like we’ve seen recently. You can see the clear positive correlation in the chart here.

As a gold bug, I love this one. It is true only some of the time, while a majority of time, the opposite is true: Rising interest rates are not negatively correlated with gold, but positively correlated! Guess what happened from 1980 on? As interest rates plunged, so did the price of gold.

But the simple fact is that we are nowhere near that point now. Real interest rates are still very negative based on the true inflation rate, and they have a very long way to go on the upside before they will even make a dent in any of the markets.

Until that time occurs, rising interest rates should be your signal that equities and commodities have much more to go on the upside.

So then, what about gold right now? Why is it still caught in a downtrend? Why is it falling like a rock, threatening to take out my next sell signal and move below $1,500? And why am I still bearish on gold, silver and commodities in general?

It has nothing at all to do with interest rates. It’s simply because virtually all commodities need more time to work off their prior bull legs higher, time to chew up and spit out the weak buyers, and time to move lower and consolidate before moving higher again.

And let me assure you, gold and other commodities will blast off again, and when they do, they will do so with rising interest rates.

So please, don’t get caught up in any of the three aforementioned market myths.

If you do, you are bound to either miss out entirely on huge opportunities, or worse, get caught on the wrong side of the markets, busted, with your pants down.

P.S. A mere $89 a year will get you all, and I mean ALL, of my insights, analysis and recommendations, via my Real Wealth Report. To join, simply click here now.