ARE WE THERE YET? 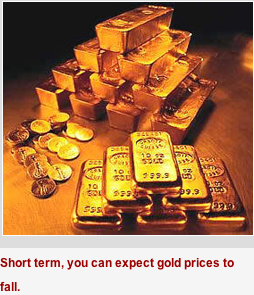 Are we there yet? Has gold bottomed? Is it about to begin its ascent to $5,000 plus?

After all, Fed Chief Ben Bernanke reiterated his money-printing policy last week, vowing to keep it in place until unemployment falls to at least 6.5 percent and inflation ticks higher.

On top of that, the Bank of Japan is printing money like never before. And the European Central Bank will undoubtedly join the melee soon as Italy falls into political gridlock, the sovereign debt crisis in Europe re-emerges, and the euro remains stubbornly strong, adding to the region’s deflationary forces.

But the simple truth of the matter is NO, we’re not there yet. Gold and other commodities are not yet ready to blast off again. In fact, quite the opposite is true …

I know that’s not what you want to hear. I myself am anxiously awaiting a bottom in the precious metals. More money than you can dream of will be made in their next leg up. But right now, gold (and other commodities) have not fulfilled their shorter-term destiny. They have not yet worked off the prior bull leg up … they have not yet shaken out the weak buyers … and perhaps most importantly, the environment is not quite ready for them to blast off again.

Despite all the money-printing going on around the world today, the overriding force right now is uncertainty.

Uncertainty about what Washington will do on spending cuts.

Uncertainty on taxes, because President Obama wants to raise them again.

Uncertainty in Europe because of Italy’s current political crisis. And uncertainty in Japan on whether the Bank of Japan’s new policies will actually turn around that country’s 23-year depression.

And uncertainty regarding whether China’s economy has bottomed and is turning up again.

In normal times, uncertainty is good for commodities and tangible assets.

But These Aren’t Normal Times

So instead, all the uncertainty that’s running rampant in the world today is having the opposite affect: It’s driving loads of savvy and not-so-savvy money to the sidelines. To cash.

That’s why the dollar is now soaring. You can see the sharp rally in the chart here. We may not like the dollar, but others do. That’s because — like it or not, right or wrong — the U.S. dollar is still the world’s reserve currency …

And when most of the world is experiencing as much uncertainty as there is today, going to cash means going largely to the dollar. Which is precisely why the dollar is so strong, rallying more than 3 percent during February.

That puts additional downside pressure on gold and other commodities.

Here’s a chart of gold. Quite a downtrend. So much so that now even George Soros has dumped as much as 55 percent of his gold holdings. Ditto for some other big gold investors, such as Moore Capital Management LP, which has sold its entire stake in the SPDR fund.

It’s why the total assets in the SPDR Gold Trust (GLD), the biggest exchange traded fund backed by the precious metal, dropped in the longest slump on record …

And why total global investments in all gold-backed exchange-traded products tracked by Bloomberg have tumbled 4.7 percent this year.

Thing is, unless gold can rally strongly and close above at least the $1,757 level soon — something I consider very unlikely — gold is headed much lower.

It will take out the most recent low at the $1,560 level and then flirt with the prior major low at the $1,527 level. If that gives way — and I expect it will — then great! We will finally get a washout in gold down to below $1,400 … all the weak longs will be shaken out … and a new bull market can then begin to form.

It’s much the same for silver. And many other commodities. And mining shares too.

And if you’re one too, you should be hoping for a washout. Because, very simply put, a washout is what’s needed to clear the path for much higher prices to come in the future.

There are a few different ways to play what’s happening here.

To take a nice long position in the dollar as it rallies further, consider a stake in thePowerShares DB US Dollar Index Bullish ETF (UUP).

As I’ve long maintained, U.S. equity markets are entering a new bull market, one that could easily take the Dow substantially higher. Despite the potential for rising interest rates.

Why is the Dow so strong considering the problems in Europe and Washington, not to mention Tokyo?

This is where you need to put your thinking cap on. The U.S. equity markets are strong and forming a new long-term bull market precisely because of the problems in Washington, Europe, and Japan.

Europe and Japan’s sovereign debt crises are causing capital to leave those markets and invest in ours. Believe it or not, rightly or wrongly, the U.S. is seen now as the safest bet.

And as far as Washington goes, don’t fall into the trap that spending cuts will destroy the economy and the equity markets. It’s precisely the opposite: The best thing that can happen is for the cuts to go through … for government to downsize … and get the heck out of the private sector.

So there will certainly be some pain. Unemployment will most likely start to rise again.

But again, none of this means stocks are headed back to below 7,000. Or below 10,000. Or even below 11,000. While there is still a much-needed pullback probably coming in the stock market, getting government cut down to size is a long-term bullish factor for the equity markets.

Until next time, your ever-thinking out-of-the-box analyst,

P.S. A mere $89 a year will get you all, and I mean ALL, of my insights, analysis and recommendations, via my Real Wealth Report. To join, simply click here now.