Are The Worlds Largest Oil Pools About To Be Unlocked? 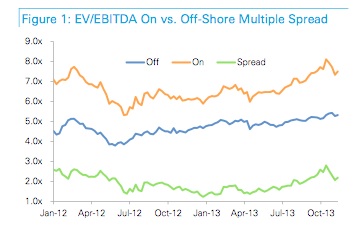 With so much excitement over U.S. shale plays lately, it’s hard to justify why investors should be looking anywhere else in the oil and gas space.

After all, what other sub-sector offers the kind of big production and returns enjoyed by unconventional shale drillers?

But there’s a fundamental shift in value underway in the oil and gas space. One that savvy stock buyers are now moving to get ahead of.

It all has to do with share prices. Just look at the chart below from Deutsche Bank—showing how multiples for onshore stocks like shale explorers (orange line) got notably richer in 2013, as compared to their peers offshore. Offshore E&Ps have been all but abandoned. Leaving their share prices to lag the overall sector.

And those low valuations are starting to grab attention—at least amongst energy insiders. Pros attracted not only to the cheap assets here—but also the potential for big production adds on the back of emerging technological developments that are revolutionizing offshore development.

Insiders like Fieldwood Exploration, who this past October paid $3.75 billion for a package of GOM properties this September. Purchased from oil major Apache—part of a strategic directive by that firm to exit the Gulf.

And just this month, Fieldwood took another step into the GOM—paying $750 million for a portfolio of properties from SandRidge Energy. Establishing this upstart firm as the largest asset holder in the Gulf—now producing 125,000 barrels of oil equivalent per day here.

Now, you’ve probably never heard of Fieldwood. It’s in fact a brand new company. But the people behind it are some of the biggest names in the energy business.

Seeing these players going after Apache’s GOM assets is intriguing. And a little perplexing. After all, the Gulf is thought by many to be a play on the decline—with output having fallen nearly 25% over the last four years, to just 1.3 million barrels per day. Certainly not as exciting as the shale revolution that’s happening onshore.

The properties that Fieldwood shelled out billions for aren’t even in the high-impact deepwater. They’re in the shallow Continental Shelf. An area where most of the major discoveries were made a half-century ago.

Why would the world’s top energy minds stump up such a huge sum for picked-over project acreage?

The answer lies in some recent—although little-reported—developments on the Shelf. The kind of undercurrents only oil insiders are watching. For the moment.

Insiders like Riverstone’s James Hackett. An industry pro who has worked the Shelf as head of a succession of major Gulf players—Anadarko, Devon, and Ocean Energy.

Knowing the Gulf like no other, Hackett has undoubtedly been following the work of some of his old compatriots—at emerging oil producer Energy XXI (Nasdaq: EXXI).

Energy XXI has been a big—although very quiet—success in the Gulf the last several years. The company started with a blind $300 million raise on the AIM in 2005, and then began acquiring assets in the Gulf. Picking up fields from groups like ExxonMobil and Pogo Producing Co.

Conventional wisdom however, is that most of the oil left in these aged fields will never come out of the ground. The easy-to-produce crude has long been pumped. Leaving behind only table scraps—not the sort of thing you could build a significant production base around.

But Energy XXI’s results defy these doubts. As the chart below shows, the company has increased proved reserves at its Shelf fields by nearly 200% since taking them over. How is such growth possible in a “played out” area like the Shelf?

The answer is simple: unconventional drilling.

Look at the quantum leap in Energy XXI’s reserves during the last year. The company’s proved reserves surged almost 50%, or nearly 60 million barrels of oil equivalent. Reserves value also leapt by 50%–to over $6 billion.

That jump coincides with the company taking a revolutionary tack—becoming one of the first companies to drill directional wells, AKA horizontals, into big GOM oil pools.

Horizontal drilling has a number of advantages. As the diagram below shows, horizontal wells put more well bore in contact with the reservoir formation. Meaning it’s easier for crude to flow into the well than with a conventional, vertical hole. But horizontal wells don’t just pull crude out of the reservoir faster. Early results suggest that this advanced drilling will ultimately produce more total barrels out of the aged fields here. Creating billions of dollars in new reserves.

Look at some of the numbers. Recovery rates for crude oil pools in the Gulf have historically run about 45%. Meaning that more than half of a pool’s oil in place was left behind when operators plugged and abandoned a well.

Management at Energy XXI believes that its current drill campaign will increase recoveries by 5%. You can see the difference in the production curve below—from one of the company’s recent presentations. The red line at the right represents the forecast production curve using traditional drilling techniques. The black line above is the improved production profile from horizontal wells. And the shaded area in between is the increase in total recovered reserves. That extra 5% recovery makes a big difference when you’re talking about oil pools containing billions of barrels in place. A 5% increase in recoveries across Energy XXI’s Gulf holdings equates to at least 80 million additional barrels.

And that 5% is just the company’s initial target for recovery increases. As management learns more about the effects of advanced drilling on the reservoirs here, they believe recoveries can be taken even higher. Potentially unlocking hundreds of millions of new barrels—on their properties alone.

Applied across the Gulf, such advanced technology will add billions of barrels in new reserves. At very low discovery costs (we know the oil is there, we just need to poke better holes in it). During the past year, every $1 that Energy XXI spent on development created $2 in proved reserves. A phenomenal performance.

These stellar results beg the question—why have drillers in the GOM waited this long to apply horizontal drilling?

The answers lies in some recent revolutions in drilling technology. Techniques that are unlocking the old Gulf oil plays in ways few investors have realized. Yet.

In Part II of this series we’ll look at exactly how this drilling technology works—and where it will create the next major investment opportunities in the “new” offshore oil industry.