Another Washington Currency Scheme? It’s Enough to Make You Cry 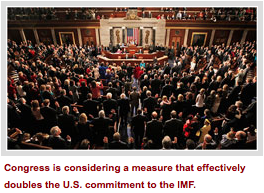 There seems to be no shortage of bad ideas in Washington. They usually involve an unspecified cost to the people at large to provide an undisclosed benefit for the influential and well-connected. But it takes peeling the onion to see what’s really going on in some of these Washington schemes.

One of the latest — a really bad idea that popped up this week — is from Senator Marco Rubio. Rubio has been sharing a lot of his ideas about Ukraine and Russia lately. In March, he offered a package of “8 Steps Obama Must Take to Punish Russia.” Among them was his idea that we must make a renewed push for the Republic of Georgia to join NATO.

Another NATO member on Russia’s border? Bad idea. There is enough dry tinder for one conflagration already.

There is as well — if anybody cares — the issue of U.S. integrity. Rubio may be too young to remember, but the Soviet Union was still a fearsomely armed world power when it dissolved. It had 380,000 troops in East Germany, a military presence resulting from Germany’s unconditional surrender ending World War II. Now the Soviet Republics were being set free and the Warsaw Pact was expiring. It was a remarkable thing seeing the Evil Empire, armed though it was with thousands of nuclear warheads, simply come to an end. Without a shot being fired. It seems to have been a reasonable point. Russia, like other nations, is concerned about expansive military might on its border. That’s really the source of the flare-up in Ukraine today.

In any event, it seemed reasonable enough to President Reagan’s secretary of state, James Baker. “Not one inch eastward” were his words about NATO expansion as he discussed conditions with Gorbachev in Moscow. The deal was confirmed in the Kremlin the next day by Germany. Chancellor Helmut Kohl agreed, while his foreign secretary, Hans-Dietrich Genscher, assured the Kremlin that “for us, it stands firm: NATO will not expand itself to the East.”

And with that the Cold War — having bled the people of two continents for more than a generation — simply died.

Still some people would like to see it resurrected. Rubio has joined 20 other senators as a sponsor of the Russian Aggression Prevention Act of 2014. It calls for more armaments for Ukraine. It authorizes increased spending on NATO. It demands joint military exercises with Ukraine, Georgia, Moldova, Azerbaijan, Bosnia and Herzegovina, Kosovo, Macedonia, Montenegro, and Serbia.

Perhaps its least noted provision is the most loaded with explosives. It appropriates $10 billion for the U.S. to meddle in the internal political affairs of Russia, in the same way that the government spent $5 billion meddling in the internal affairs of Ukraine and micromanaging a regime change in Kiev.

But now Rubio has offered another big idea, launching it on the editorial page of Tuesday’s Wall Street Journal. Rubio is calling for the establishment of a “currency board” to prop up the value of the hryvnia, Ukraine’s national currency. Rubio says Americans must extend to Ukrainians the benefits of having “a trustworthy sovereign currency.”

Shouldn’t the trustworthiness of Ukraine’s money depend on Ukraine’s fiscal and monetary probity? The world is crawling with countries that would like to have trustworthy sovereign currencies but are unwilling to act responsibly to get them. Why then should the American people, still straining under the “new normal” conditions of their own economy, be taxed to provide for them what they are not willing to provide for themselves?

If Rubio understands exactly what a currency board is, it is not apparent in the text of his proposal. One should always be skeptical of grandiose government plans and schemes that don’t come with hard and reliable numbers attached. Rubio offers not a single number that would make clear the cost involved in funding a reserve sufficiently large to provide an unlimited liquid market for a broken currency at a fixed and artificially high price.

Ukraine is free to establish a rule-bound exchange rate using its own currency reserves, but Rubio has his eye on your money, citing IMF loans of unspecified scope. Of course the IMF is a device for laundering U.S. taxpayer money, since we are the largest contributing nation. Right now Congress is considering a measure that effectively doubles the U.S. commitment to the IMF, a package to approve $65 billion to IMF core funding and about $106 billion for an IMF supplementary fund.

Despite its failure to meet the terms of two prior IMF loans, the institution has approved a new $17 billion package for Ukraine. In the air around these multinational deals and proposals like Rubio’s, one catches the desperate scent of bankers anxious to be spared the risk of a default. A good chunk of the new IMF package will be used by Ukraine to pay banks and Gazprom, the Russian gas giant which is owed $2.2 billion.

So to peel the onion: Americans will borrow money from foreign creditors like Russia (yes, Russia is a major creditor of the U.S. Treasury) and China to launder through the IMF to give to Ukraine which in turn will give the money to multinational banks and Russian plutocrats. It’s enough to bring a tear to your eye.

And now we are asked to fund a currency board to prop up Ukraine’s hryvnia.

What about our own currency? Has Senator Rubio looked at the fundamentals of the dollar lately? It would make a grown man cry.

P.S. Don’t wait one moment longer to read the shocking truth behind the most devastating scandal of this or any other century!