Anemic Detached Inventory Pushed Home Values Higher in 2020, Will This Continue in 2021? 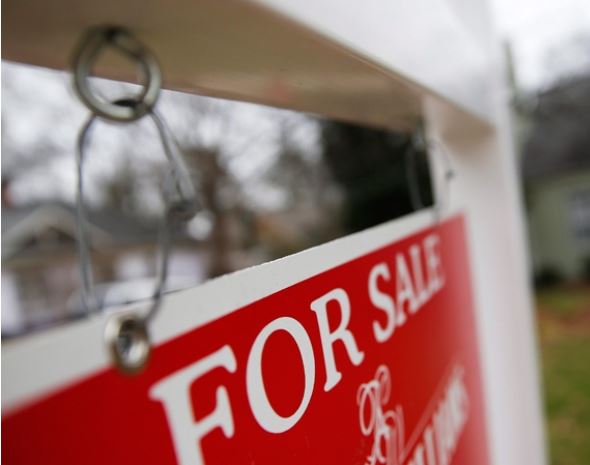 Some analysts believe the increased prices were due to the increased demand, we disagree. The 2020 total sales completed with over 10,800. This data point indicates an increase compared to the previous 2 years of data but well below the 15 year average of 12,748 sales.

Eitel Insights believes the increased prices resulted directly from anemic levels of inventory, along with lower interest rates, which resulted with increasing home values. The statistical anomaly of not being able to surpass 5000 active listings in any month during 2020 will not likely occur again in 2021. The increase to the number of mortgage in arrears will likely result with increased inventory, due to need based sellers. Add in the struggling economy with continually increasing personal debt, just as government stimulus wanes.

All in all, there is a possibility the market can sustain current pricing levels, if the inventory does continue to buck historical norms. The more likely outcome is inventory increases along with a diminished demand for the detached homes, due to the pulled forward sales which occurred during 2020. 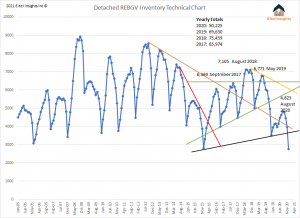 This low level of inventory combined with sudden demand to own a detached properties combined for the perfect storm and forced prices the highest price of 2020 during December. Achieving a 1.770M average sales price across Greater Vancouver, the highest sales price since May 2018. During the upcoming year, if inventory remains virtually non-existent, prices can be sustained into 2021.

As the majority of detached homes are owner occupied, the thought of having buyers come through your home during the pandemic was not acceptable to most. Even though prices increased over $190,000 from the May 2020 low of $1.586M to over $1.770M in December. The inventory hit its 15 year low of just 2,762 active listings in December 2020. Typically inventory increases as the prices rise. With prices back into the upper third of the current market cycle, and a vaccine en route, the notion of selling will become acceptable again.

Those who are willing to list will reap the rewards, the December low data point not only broke below 3000 active listings for the 2nd time in 16 years but the data broke the longer term uptrend which was established during 2015. Is the historic low of December due to the recent shutdown measures imposed by the government or will the low levels persist?

The data accumulated in the initial 6 months of the 2021 market will likely set the tone for years to come. If the inventory remains at extreme lows, prices can be sustained at the current level with a possibility of achieving a new all-time high. If this occurs, the growth cycle will have been born through the lack of supply. We anticipate this to be the less likely scenario of the two. Longer term, yes, prices will eventually escape the market cycle that Vancouver has been in since 2016, but in the short term we believe the impact of a deteriorating economy will force the home prices back lower in the market cycle to test previously established price points.

Interesting point, when there is an anomalous low data point, the market historically reacts with a much higher set of data, in an effort to counter act the anomaly. This implies inventory could rebound heavily in 2021. 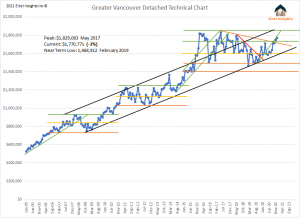 Prices were volatile during 2020. Home values began the year with an average sales price of 1.590M in January. During February there was a spike higher with the average sales price achieving 1.710M. After the first lock down, prices fell back to 1.586M in May. Then like a shot out of a cannon, home values rapidly increased back up to the February high and beyond. With the December price reaching 1.770M that indicates prices have re-entered the upper third of the market cycle, only down 3% form the all-time high of 1.830M experienced during April of 2017.

Home values rose due to the serious lack of options, the peak of inventory during 2020 could not rise above 5,000 active listings. In the past 16 years, 2020 was the first instance where not one single month of active listings was able to achieve above 5,000 detached properties for sale. The limited inventory forced buyers to compete with each other for the very few new listings that came out each month. Until inventory begins to dramatically improve, prices will have an artificial bottom which could propel the market higher. 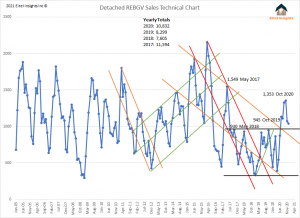 The detached market finished 2020 with over 10,800 sales. A relatively high number considering there was only 393 sales during April 2020. This unusual activity given historical seasonal norms, meant the spring market was pushed into the summer, summer to fall and so on.

Greater Vancouver detached achieved the 5th lowest sales total in the past 16 years. Again to the earlier point, the increase of home values during 2020 had less to do with the sales, and everything to do with the inventory.

Going forward the key to the detached market can be reduced to one factor, supply. With home prices back up to the 2016 levels coupled with an economy is not recovering nearly as fast as the housing market would indicate. The Covid vaccine is seemingly on the way, coupled with higher prices than 2019 and 2020, owners who put selling their property on the back burner, may refocus during 2021. Again the current inventory is only at 2,762 signaling the lowest level on the 15 year chart. This creates an excellent selling opportunity for home owners.