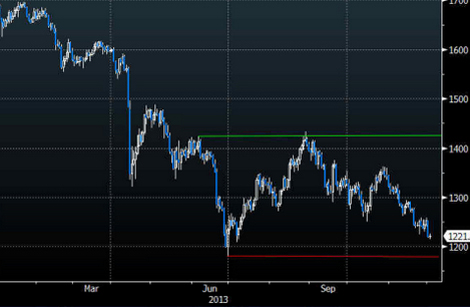 History may provide insight on where gold goes from here.

Gold and silver hit fresh five-month lows this week as Fed taper concerns continued to weigh on the markets. The central bank could act as soon as this month when it makes its next monetary policy decision on Dec. 18. Gold bulls must defend the $1,180 cycle low from July to prevent a sharper decline to $1,000 in 2014. That said, as 2013 draws to a close, it’s a good idea to put this year’s gold decline in perspective. As of today, the yellow metal is down 27.1 percent since the start of the year.

That’s among the worst annual performances on record, but not the worst. Since the end of the gold standard and fixed gold prices in 1971, the yellow metal has put in an annual loss of more than 20 percent on three separate occasions, excluding this year.

The first was in 1975, shortly after the dismantling of the Bretton Woods system, which was the last vestige of the gold standard. That year, prices fell by nearly 24 percent. But that decline came after a surge of 73 percent in the previous year.