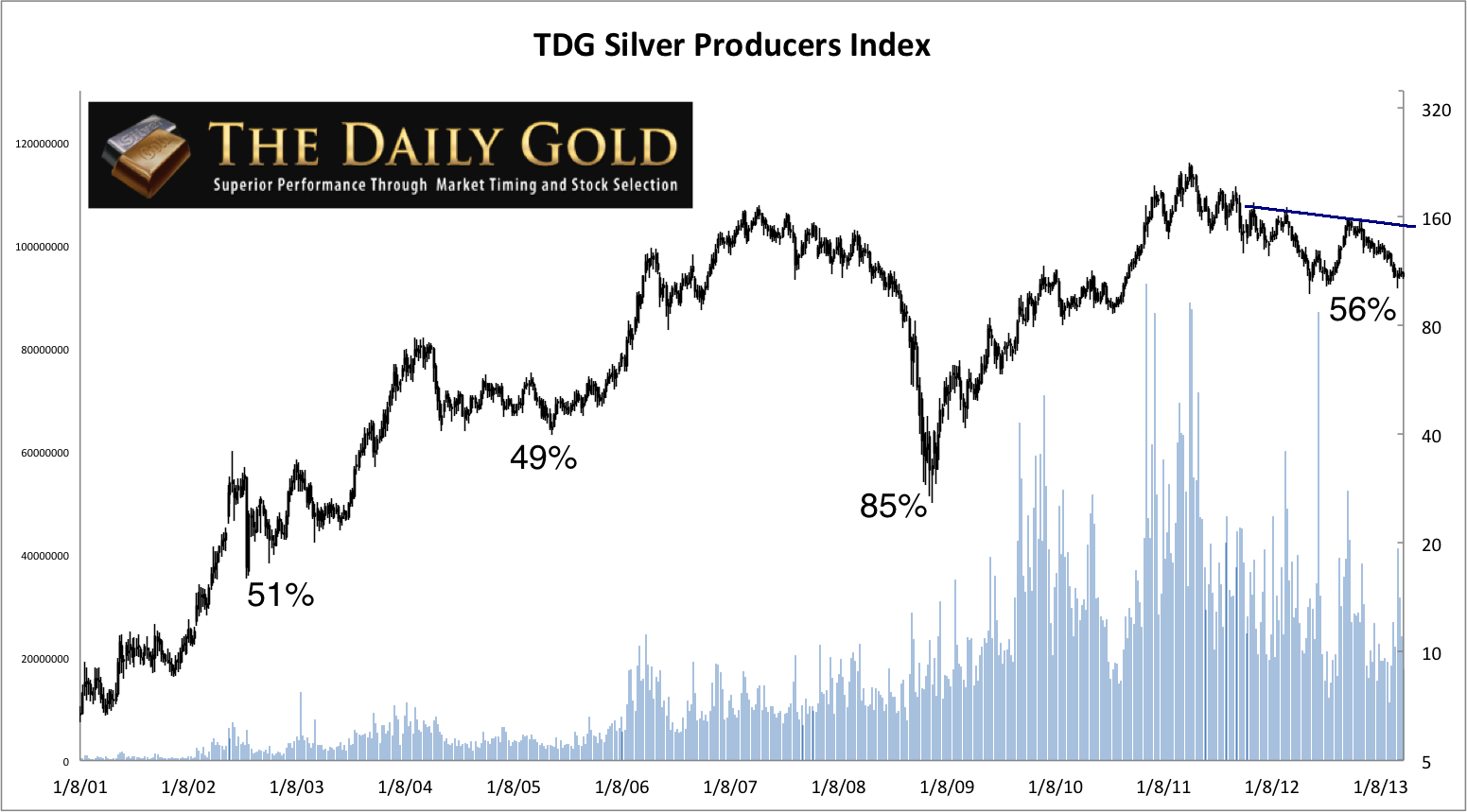 An Update on the Silver Stocks

by Jordan Roy-Byrne The Daily Gold

When we discuss gold stocks we often refer to gold and silver stocks. Today we take a look at the silver stocks specifically.

Below is a chart of our partially weighted producers index which contains 14 of the largest silver producers. We didn’t cherry pick the 14. We went down the list and that includes a handful of companies which have really struggled in recent years. Anyway, the 56% in the current cyclical bear is well in line with history. Previous downturns have been 51% and 49% and then 85% from 2007-2008. Only time will tell but there is a chance that this evolving spring bottom could be the right side of a major long-term double bottom. Keep an eye on the trendline above. A break above that and the multi-year outlook becomes all the more bullish given the lack of overhead resistance.

Zooming in (see below) we find that the market is holding slightly above its 2012 double bottom. The silver stocks put in a strong bullish reversal with volume four weeks ago. The market has yet to confirm the bottom but it could if it closes next week or the following week at five or six week high. Once that happens, the downtrend line becomes the next important resistance. There are a few other observations to note. First, note that SIL is showing relative strength against Silver. For whatever reason, the silver stocks in comparison to the gold stocks have fared better. The gold stocks (GDX, HUI) have broken below their 2012 lows while the silver stocks have not. Also, note the average volume in SIL. The 20-day average volume is roughly 100K shares. At its peak two years ago it was about 1.5 Million shares. That is 15 times higher!

Relative to gold stocks we were super bullish on silver stocks in 2010 but less so in 2011 and 2012. Gold leads Silver but once Gold finds its stride Silver heats up. If the precious metals bull market has another leg higher in it then we’ll move to an overweight position in the silver stocks at somepoint. The silver stocks as a group haven’t experienced a sustained breakout to new highs since 2007. If Silver is to advance to $40, $50 and beyond then that has incredibly bullish implications for the chart of our Silver Producers Index. The silver producers could be poised for leadership and incredible performance in 2014 and 2015. If you’d be interested in professional guidance in uncovering the producers and explorers poised for big gains in the next few years then we invite you to learn more about our service.