An Outlook for Crude Oil 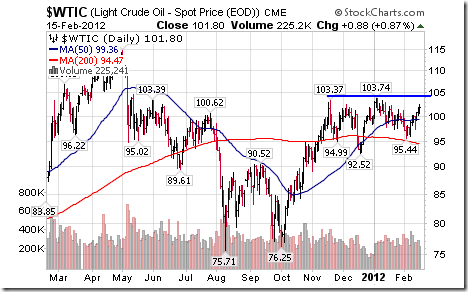 Crude oil recently entered into a period of seasonal strength. What are prospects this year?

Strength in WTI crude oil prices during the “sweet spot” is related to rising seasonal demand triggered by a recovery in the economy following the slower winter season. Notable gains are recorded by the transportation, construction and auto sectors. Once again, demand by these sectors is expected to rise this spring, particularly in Canada, United States, Japan, China and India.

Crude oil prices during the “sweet spot” this year are expected to be impacted by several special events that have limited supply. The price of Brent crude oil has jumped more than 14 per cent since mid-December despite a gain of only 8 per cent by WTI crude oil. Brent prices have responded to a decision by European buyers to switch from production from Iran to other sources including North Sea oil. Rising Brent prices slowly, but surely, is filtering back to WTI crude oil prices.

Concern about political instability in the Middle East also is an influence. Iran has threatened to close the Straits of Hormuz if attacked. International concerns about Iran’s nuclear program likely will continue to escalate this spring. On Wednesday, Iran denied a rumor that oil shipments to six European nations had been halted due to recent plans taken by European nations to discontinue purchases of crude oil from Iran by July.

On the charts, the technical picture on WTI crude oil prices is positive and improving. Intermediate trend is up. Support is at $95.44 and resistance is at $103.74. Crude oil recently bounced from near its 200 day moving average at $94.59 and broke above its 50 day moving average at $99.32. Short term momentum indicators are recovering from oversold levels. A break above resistance implies intermediate upside potential to $112.75 per barrel. Don Vialoux is the author of free daily reports on equity markets, sectors,

available at http://www.timingthemarket.ca/. He is also a research analyst for

Horizons Investment Management Inc. All of the views expressed herein are his

personal views although they may be reflected in positions or transactions

in the various client portfolios managed by Horizons Investment Management.