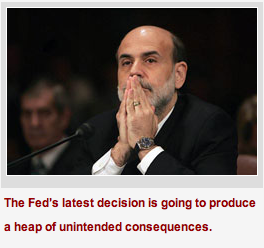 Never mind all those foolish critics out there who said otherwise. They can criticize you all they want, but had they been in your shoes back then, they would have implemented the very same measures and policies you did. I’m sure of it.I hope this letter works its way into your inbox. After all, I used to be one of your staunchest supporters. You’ve been unfairly treated in the past. When the global financial system melted down in 2008-09, you took the right measures.

You had no choice but to pump trillions of dollars into the global economy. If you hadn’t, the world would have gone back to the dark ages.

But with your latest decision, I think you blew it big time. Here’s why:

First, you believe the U.S. economy is not yet strong enough to stand on its own two feet. But do you really think the money-printing-addicted U.S. economy is going to get better with still more opiates?

Is that the right medicine at this time? After all, if the U.S. economy is going to turn the corner, it’s going to do it with or without you.

And if it’s not going to turn the corner at this point, then all your hard work and all the money that you continue to print isn’t going to amount to a hill of beans. Second, you’re worried that Washington may soon run out of money. The debt-ceiling battle is about to ramp up again with a vengeance. There’s even a real chance the government will run out of funds and have to shut down.

I say if Washington can’t get its act together, then let it shut down. Let it run out of money.

It’s high time those pranksters in Congress took their jobs and responsibilities seriously.

It’s high time they cut their wasteful spending, slash their own salaries and pensions, lay off their own staff, turn off the air conditioning and dim the lights.

The rest of us are trying our hardest to run our businesses and our homes within our means. Isn’t it about time that our leaders in Washington do the same?

Third, you’re worried that bond traders got way ahead of themselves by anticipating higher interest rates. After all, since April, the yield on the U.S. 10-year Treasury has shot up from 1.6 percent to 2.8 percent. You think that’s too much, too soon.

But if it is too much too soon, so what? The free markets always correct themselves. If rates went up too far too soon, the market would correct it and rates would come back down on their own.

And if rates continued higher instead, then it would likely be because the U.S. economy is picking up, and growing. In that case, the economy would catch up with higher interest rates. Isn’t that a good thing?

So why not let the bond market do its own thing, adjust to reality, of its own accord?

Fourth, you’re also clearly worried that Europe can’t stand on its own two feet either. On that score, I agree with you. I know there’s a lot of talk out there that Europe has finally turned the corner.

I say baloney. Most of Europe is sliding deeper into a depression. European banks are still in tatters. Greece needs a new bailout. Portugal will need another one soon. Italy remains fragile, to put it lightly. And Spain is a mess.

But is Europe really our problem? Why do we have to try and fix Europe’s ill-conceived attempt at a single currency and monetary union, which is the root cause of its crisis?

A few years ago, yes, Europe needed help. But at this point, it’s up to Europe’s leaders to make the right moves. They need to implement a national deposit insurance program. They need to form a true central bank, not a figurehead central bank with the national central banks of each country still calling their own shots.

They need a single sovereign bond market. Not a fractured bond market made up of what amounts to municipal bonds of each country acting like a pseudo-sovereign euro bond.

By giving Europe’s leaders more time, all you’ve done is coddle them and given them the opportunity to continue to drag their feet on the much needed reforms they need to make. That is not going to help the situation.

Fifth, you’re worried that rising interest rates are negatively impacting emerging markets. Mr. Bernanke, I live in Asia. Interest rates are rising here because there are signs of inflation appearing everywhere. The minimum wage is going up all over Asia. Factories are humming along on overtime. Chinese growth is propelling all of Asia forward. Economic growth is about to explode to the upside again.

Rising rates are not negatively impacting Asia. Quite the contrary, they are a sign of growing economies. Of growing demand for money and credit. Isn’t that the way it should be? Isn’t that how healthy economies are supposed to work?

Now, I know a new Fed Chairperson will be appointed shortly. But that shouldn’t impact your thinking one iota.

You still have a couple of months to get the patient — the U.S. economy — out of bed and walking on its own two feet. It’s OK if it’s a little unsteady at first.

Do the right thing. Start weaning the economy off the drugs. Let the rest of the Federal Open Market Committee know that’s the right thing to do. I think — no, I know — you’ll be pleasantly surprised at the result.

Just look at the price of gold. It’s not flashing any panic signals. If deflation were as big a problem as you think it is, then gold would already be well below $1,000 an ounce. But it’s not.

And if inflation is expected to be a big problem, then gold would be much, much higher than it is.

Instead, gold is experiencing a bit of disinflation, a cooling off, which is a good thing. It’s still caught in a downtrend that probably won’t come to an end until it falls a bit more, below $1,150 … down to about $1,045.

And the decline that’s occurred in gold, its multi-hundred dollar plunge from its high at $1,921 in September 2011, has occurred despite all the money-printing you’ve done.

That’s telling you — in no uncertain terms — that perhaps inflation is not going to be the big problem that most people think.

And by the same token, the fact that gold is in a new long-term bull market and merely correcting its previous overbought condition — tells you that deflation is not a problem either.

So I repeat: Let the patient, the U.S. economy, get out of bed and walk around a bit. A breath of fresh air will do it wonders. Let it happen before it’s too late, and the patient ends up even worse off than it was before.