An Early Warning That Interest Rates Are Heading UP 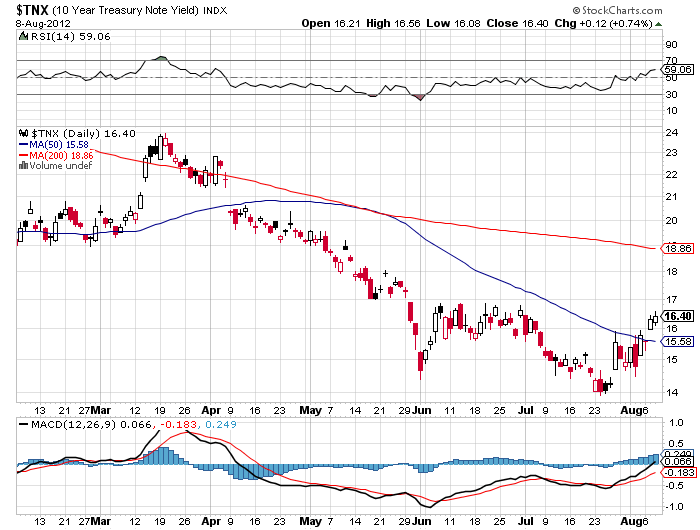 Once again, here’s the yield on the bellwether ten year T-note. And darned if it didn’t gap up yesterday — it gapped clear out and above its 50-day MA. Is the market telling us that the bond boom is over? Has the bond bubble burst, and are interest rates heading UP? Quick, refinance your mortgage.

Wait, don’t laugh away this little gap up in the ten-year T-note. Up until recently, US Treasury debt has represented the world’s ultra-safest haven, the safest place on the planet to store your money. So could this little rally in the yield of the 10-year T-note mean that the world no longer believes US Treasuries are the number one safest place to store money?

Remember, last year S&P lowered the US’s credit rating from AAA to AA+, the first time in history that the rating on the sovereign debt of the US has been lowered. Now, we’re moving ever-closer to the “fiscal cliff” — when taxes will be raised and spending will be cut, thereby almost guaranteeing a severe recession. Will the politicians in Washington let it happen? Well, stranger things have occurred.

On June 8th, S&P issued its latest warning. There’s a one in three chance the S&P will cut the US’s rating again by 2014. Let me put it this way — S&P does not like the way things are shaping up. Time is growing short. And the yield on the 10-year T-note is rising. And that’s not just talk, it’s the market issuing an early warning.