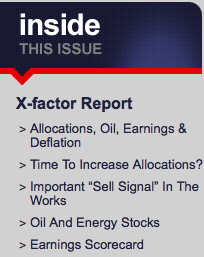 As you are aware, last weekend I presenting at the 2015 World Economic Conference, click here to download the presentation slide deck, so I did not have a chance to analyze the short-term market dynamics as thoroughly as usual. This week is going to be a bit different from usual because I need to move quickly through a broad array of issues that need some attention.

After a very bumpy December and January, I wrote this past Monday that the markets had reached enough of an oversold condition to bounce. That call was almost perfect as the markets had one of their biggest rally weeks in the past three years.

To wit: “However, during any correction, or more importantly during a mean-reversion process, the financial markets do not move in a singular direction but rather like a “ball bouncing down a hill.” For investors, it is these short-term bounces that should be used to rebalance exposure to “portfolio risk.”