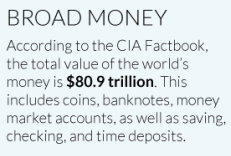 How much money exists in the world?

Strangely enough, there are multiple answers to this question, and the amount of money that exists changes depending on how we define it. The more abstract definition of money we use, the higher the number is.

In this data visualization of the world’s total money supply, we wanted to not only compare the different definitions of money, but to also show powerful context for this information. That’s why we’ve also added in recognizable benchmarks such as the wealth of the richest people in the world, the market capitalizations of the largest publicly-traded companies, the value of all stock markets, and the total of all global debt.

The end result is a hierarchy of information that ranges from some of the smallest markets (Bitcoin = $5 billion, Silver above-ground stock = $14 billion) to the world’s largest markets (Derivatives on a notional contract basis = somewhere in the range of $630 trillion to $1.2 quadrillion).

All figures are in the equivalent of US dollars.

About the Money Project

The Money Project acknowledges that the very concept of money itself is in flux – and it seeks to answer these questions.

The Money Project aims to use intuitive visualizations to explore ideas around the very concept of money itself. Founded in 2015 by Visual Capitalist and Texas Precious Metals, the Money Project will look at the evolving nature of money, and will try to answer the difficult questions that prevent us from truly understanding the role that money plays in finance, investments, and accumulating wealth.